Chapin and I had fun dressing up this Halloween as... brain-eating, blood-dripping ZOMBIES! 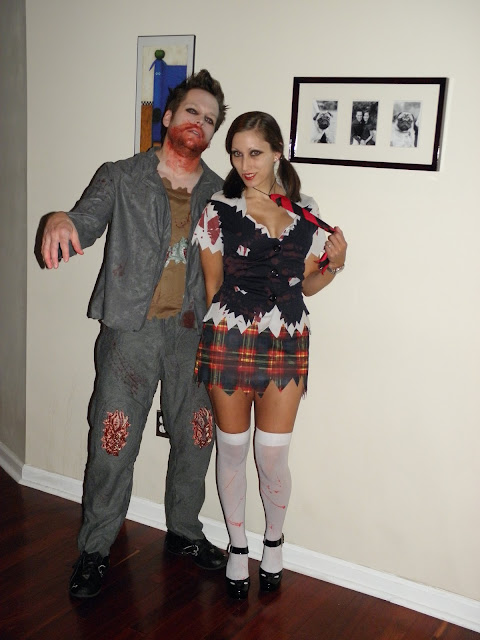 Although I was hesitant about the zombie idea -- I figured that, with the success of shows like The Walking Dead and other news about the zombie apocalypse, everyone would be dressing as zombies -- Chapin eventually talked me into it. Since he is growing his hair out, he wanted a costume where he could do something crazy with it, and a decaying zombie would be perfect. 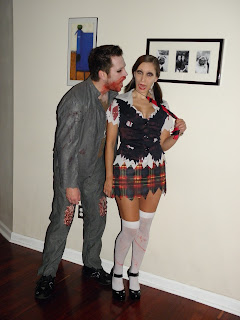 I am actually an Undead Teacher's Pet, so I got to be a sexy zombie. I guess that's why Halloween is one of my favorite holidays... because, for just one night, you can dress crazy and provocative (and get away with it). The skirt on this costume was so short that I could not bend over to grab some candy corn, but hey, it's Halloween!

Chapin is actually a character from Shaun of the Dead, a zombie spoof movie that still scares me, which should tell you that although I like dressing up as a zombie, watching movies about them is another story. I refuse to watch The Walking Dead, and scenes from 28 Days Later still haunt me. (And, no, that's not a sequel to the Sandra Bullock say no to drugs romantic comedy of a similar name.)

I did have fun doing the makeup for our costumes, though. I got to do a crazy, smoky eye on me, and Chapin let me make up his eyes as well. (The "blood" on his face is all him.) I also got to use a lot of hair spray on Chapin's head. His hair was so sprayed that my 11-year-old self from 1989 would have been proud. 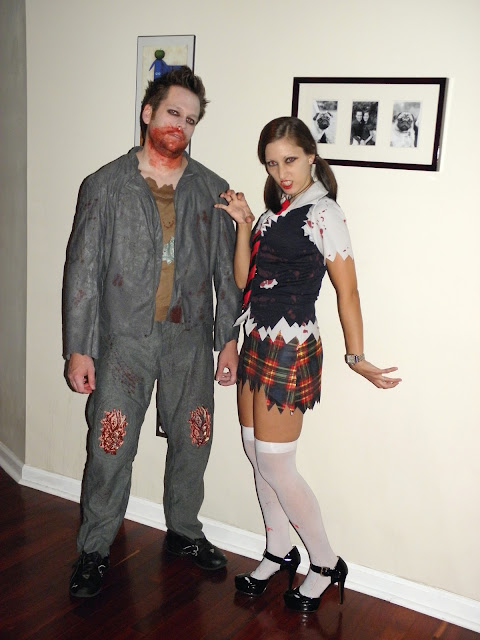 Speaking of 1989, I watched Teen Witch for the first time in years during ABC Family's Halloween movie marathon this weekend. What a terrible movie, but somehow that "Never Gonna Be... the Same Again" song still got stuck in my head.

And finally, since I could not find a zombie costume for George, he ended up being a Halloween pumpkin. Doesn't he look happy to be in his costume? 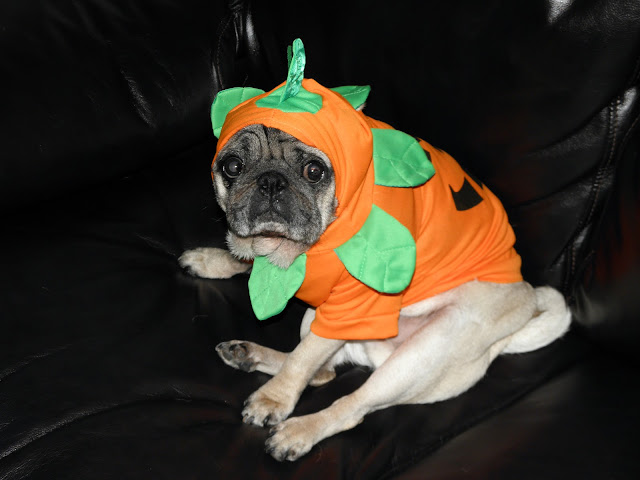 It's finally Friday, and there are some amazing sales going on this weekend that I want to bring to your attention:

October 7 - 10, 2011
Enter Code FRIENDS2011 at Checkout for 25% Off Your Order!
Code will not work on specific items like the Reva Ballet Flats, but will work on sale merchandise!

Several retail sites are also marking down Summer items as we go deeper into the Fall season, including: 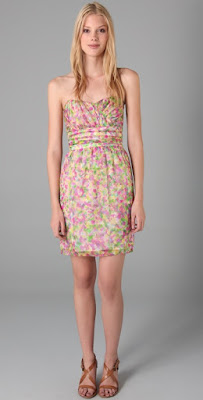