Why Length is Important

When you're petite, the length of a dress can be one of its most important aspects.

Take today's dress, for example. I love the butterfly print, but the dress hits me right at the knees, making me look stout. If the hemline came up a few inches higher, showing more leg (to help elongate the frame), I'd probably look slimmer and taller. 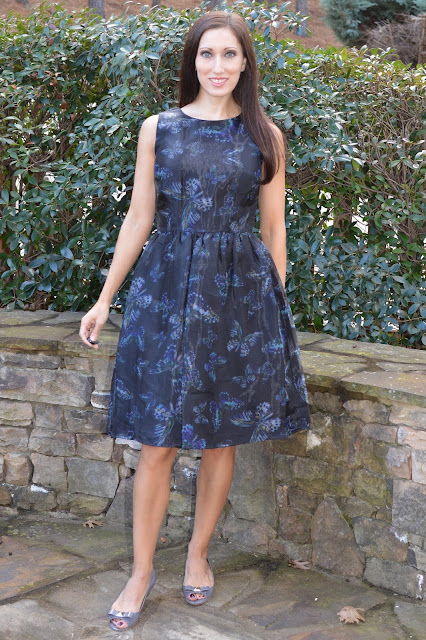 Why did I ever buy this dress, you may be wondering? Mainly, the price was right; I purchased the dress for about $20 on RueLaLa.com. Plus, ever since George passed away, I am definitely more attracted to anything with butterflies. (They are often said to represent the souls of those who have passed on.)

CeCe is the lower priced line from women's wear designer Cynthia Steffe. You can find the brand in major department stores like Belk, Lord & Taylor, Macy's, Nordstrom and others.

I don't have many organza dresses, which is another reason I wanted to buy this dress. Organza is so light and delicate, and extremely easy to wear, especially in a fit and flare silhouette.

I'm looking forward to a relaxing weekend. Work was crazy this past week, as I was traveling for part of it (Atlanta to Philadelphia to Atlantic City and back again in 36 hours). Sleep is the main item on the agenda... and catching up on my TV shows. So many shows (Scandal! Jane the Virgin!) are running new episodes again.

I've been struggling to find a show to watch while I workout, so if you have any suggestions, let me know. I've been slowly making my way through the first season of The Crown on Netflix, but it's not "must see TV" for me. Mostly, I find myself watching 80s movies or old episodes of shows I've seen a hundred times.

Chapin and I have watched a few episodes of a show called Travelers on Netflix, but I haven't really gotten into it. The premise reminds me of Quantum Leap, but with a dark twist. Basically, people from the future come back in time to try to save humanity. This twist is they inhabit the bodies of people in the instant they pass away. They essentially take over the brain of the man or woman who has died, like a baton being passed. And for how long, I have no idea. We're only a few episodes in, and hopefully it will get better. As much as I like time travel stories, I'm not really impressed so far.

Have a great weekend. January is almost over!
Posted by Everyday Fashionista at 1/27/2017