A Little Bit of Paris...

I've been a little bit obsessed with Paris lately. I think it's because the setting is prevalent in two novels I am currently reading: The Night Circus and The Story Sisters (only $1.99 for the Kindle), which I actually finished this morning. (Am I the only one who mourns novels once I'm done reading that last page? You get to know the characters so well, and then suddenly, they're gone from your life. Sigh...)

Chapin and I are hoping to take a trip to France and Italy next year, but for the time being, we're making do with French restaurants like Bistro Niko, where we ate dinner this past Wednesday night. Since George was with me at the office most of the afternoon, we didn't feel guilty going out for the evening, and I hate missing out on any opportunity to dress up.

Here I am before we left for dinner. (I wanted to show a picture with Chapin, but his head was cut off in all the shots!) I'm actually wearing a dress that I have never worn before. I've owned it for probably close to four years, and for some reason or another, just never wore it. (It's terrible to admit, but I think I actually forgot about it.) The dress is a corset dress from Nanette Lepore, one of my favorite designers. 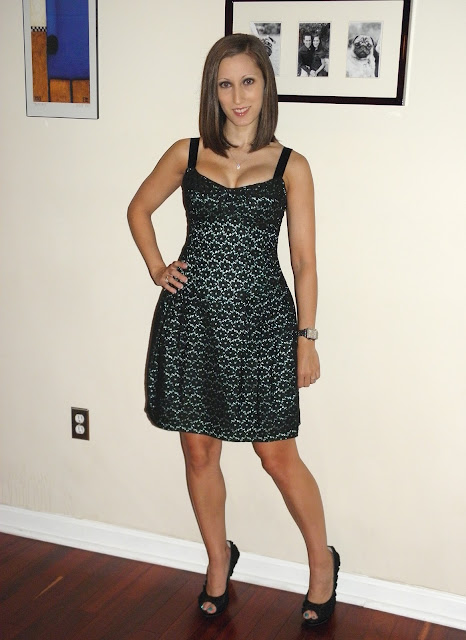 I am so in love with everything in her new collection for Fall, especially this dress, which I have already told Chapin I plan to buy as soon as it goes on sale. Brands like Nanette Lepore and Rebecca Taylor really turn out feminine, sophisticated looks, and that's probably how I would define my style. I also like looking sexy, and I think this dress I wore for our dinner out definitely fits the bill.

Since Chapin and I usually eat dinner in front of the TV, going out for a leisurely evening is such a nice change of pace for us. On this particular night, the weather was clear and the temperature in the mid 70s, so we sat outside to enjoy our food and wine.

For me:
I wanted to get something definitively French, so I decided to start with the Vichyssoise, which I enjoyed saying as much as eating. This Chilled Leek & Potato Soup was delicious, and  I especially liked dipping my bread into the cold soup.

Oh yes, the bread. I'm not one to stay away from carbs, otherwise I would be much thinner, and this bread was just divine. The outside was crispy but not tough, and the inside was like puffs of soft air hitting my tongue. When we first walked in, we could see baskets of French bread in the open kitchen, and knew we weould be in for a treat.

For my entree, I decided on the "Sole Aux Cherries de Tomate": Maine Lemon Sole, cherry tomatoes, tomato lobster broth and polenta. The fish was a bit bland for me, so I made sure I had enough tomato, polenta and fish on my fork for each bite. (It reminded me of how Barbara Streisand's character in The Mirror Has Two Faces ate her salads... "the perfect bite," she would say.)

For Chapin:
Chapin did not have an appetizer, instead having two pieces of buttered bread, and got the Magret de Canard Rôti a L'Cumquat (Pan Roasted Breast of Duck served with cumquat marmalade and red cabbage) for his main course.

We were both so full, and it was almost 10 p.m by the time we finished our entrees, that we decided to skip dessert. Since Chapin and I both love sweets, that's saying a lot!
Posted by Everyday Fashionista at 9/30/2011