Remembering a Moment in History

Today is the tenth anniversary of the September 11th attacks on the United States. Like those who lived through other major events in history -- President Kennedy's assassination, for one -- I'm sure I will always remember where I was when I heard that the first World Trade Center tower had been hit. 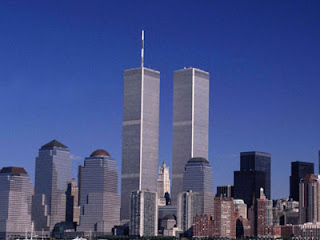 It was the morning of Tuesday, September 11th, 2001, and I was working as a Project Manager at a small website company in Atlanta called Definition 6. I had been working there for about a year and a half; it was the first job I had taken upon graduating from Emory the previous Spring.

I remember the day before, September 10th, Chapin and I had both actually taken the day off work. I needed to see a movie for a junket I was to cover during the upcoming weekend: Big Trouble. (I was still freelancing for INsite Magazine at the time. The junket was later canceled and the movie, though a comedy, wasn't released until the next year due to a subplot with a bomb.) I think we also ran some errands that day, but I don't really remember now.

One of my favorite movies, Working Girl, was filmed in 7 World Trade Center, and you can clearly see the towers in the opening credits: 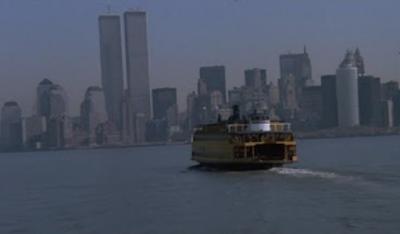 So the morning of September 11th, I came into work ready for the week ahead, energized after our little three-day weekend. I think our 8 a.m. morning meeting had just finished when someone sent out an email saying that a plane had hit one of the World Trade Center towers. I remember thinking it had to be a joke or some kind of weird prank. What was happening?

Everyone gathered downstairs and someone brought out a television so we could turn the news on. This was in the days before Twitter and Facebook, so CNN connected us to what was going on in New York City. We were all sitting there staring open-mouthed at the television when the second tower was hit. It was like watching a movie, only we all knew it was real, and that it was happening on U.S. soil. 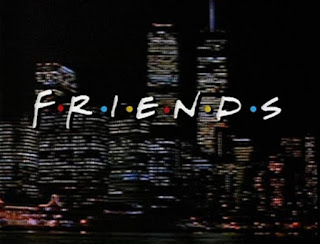 Our manager gave everyone the option to go home if we felt too emotional to work, and since I knew I would most likely not get anything done that day, I gathered up my things and headed home to our little apartment. (Chapin and I were living together at the time. We weren't even engaged yet!) I quickly called my mom as soon as I got home. She told me how upset she and my grandparents were, especially since my grandfather had worked on the construction crew that built the Towers, and she tried to update me on everyone we knew who lived or work in New York City. Fortunately, everyone was ok. (My Uncle John was working in the area at the time, and I think he got stuck in Staten Island, but eventually ended up home.) I spent the rest of the day glued to CNN, like most of the country. I also reached out to friends and family via e-mail, since many phone lines were not working.

Here are some snippets from emails I received that day and in the days afterward. (I keep everything, even old emails.)

Dear Michele,
This is the worst thing that has happened to America since I have been alive, since the day the Japanese attacked Pearl Harbor.  Please continue to pray and concentrate on your driving when going home.  There is nothing more we can do.
Love Always,
Your Dad.


From my cousin, Alicia:


Hey, our family in NY is ok...right?  I was a little worried for awhile b/c i couldn't remember if Uncle John worked in the trade building or stock exchange, plus I had no idea where Jeff, Bob, Uncle Tom, Aunt Cathy and the girls were during all this. Man, I was definitely scared. Plus, to watch as those buildings went down... I was so sad for the fact that all those people had to lose their lives and b/c grandpa worked on them.  I feel the same way... Are we in [the movie] Independence Day?

From our friend, Rahul:

Hi Michele,
What happened today was an absolute tragedy. When I heard it on the radio this morning, I thought it was some kind of prank that 99x was pulling. I changed stations, but they were the only ones saying it, then
others started saying it also! When I got to the office, I saw the CNN web page and just couldn't believe it! I am glad that your family is fine!

From my friend, Erin:

Michele,
No, I can't believe that any of this is real. I feel like it is a movie too... I don't understand what is wrong with this world. What are people thinking?!?!?!?!

From my friend, Crissy, on the day after the tragedies:

Hey. How are you doing?  Yesterday was a day I will always remember. What a tragedy to say the least. I was so upset all day long... I just kept thinking about those people and their families. And the worst part was the fact that they had no idea or warning. It is a shame it takes something like that to put things into perspective.

From our friend, Laura, in Birmingham, on September 13th:

Dear Michele,
Thanks for your email Tuesday. Ben and I feel the same way you did. I cried when I heard the news reports on the radio. It was a few hours before I saw any footage, and it is worse than I imagined it in my head. Now that they are finding out more about the terrorists, I start wondering what in the world would make someone, or some group of people, have no value whatsoever on human life. This is clearly the worst thing that has ever happened in American history.

From my husband, one week later:

I'm glad that nothing has happened today.  I really thought that something would.
I love you,
Chapin

I wanted to leave you with one story that actually has a happy ending. This blind man was rescued from the Towers with the help of his seeing eye dog: