A Tribute to George: My Pug, My Son, My Best Friend

I know this blog focuses on fashion, but it also focuses on me and my life, so I wanted to share the story of my pug, George, and his recent passing. 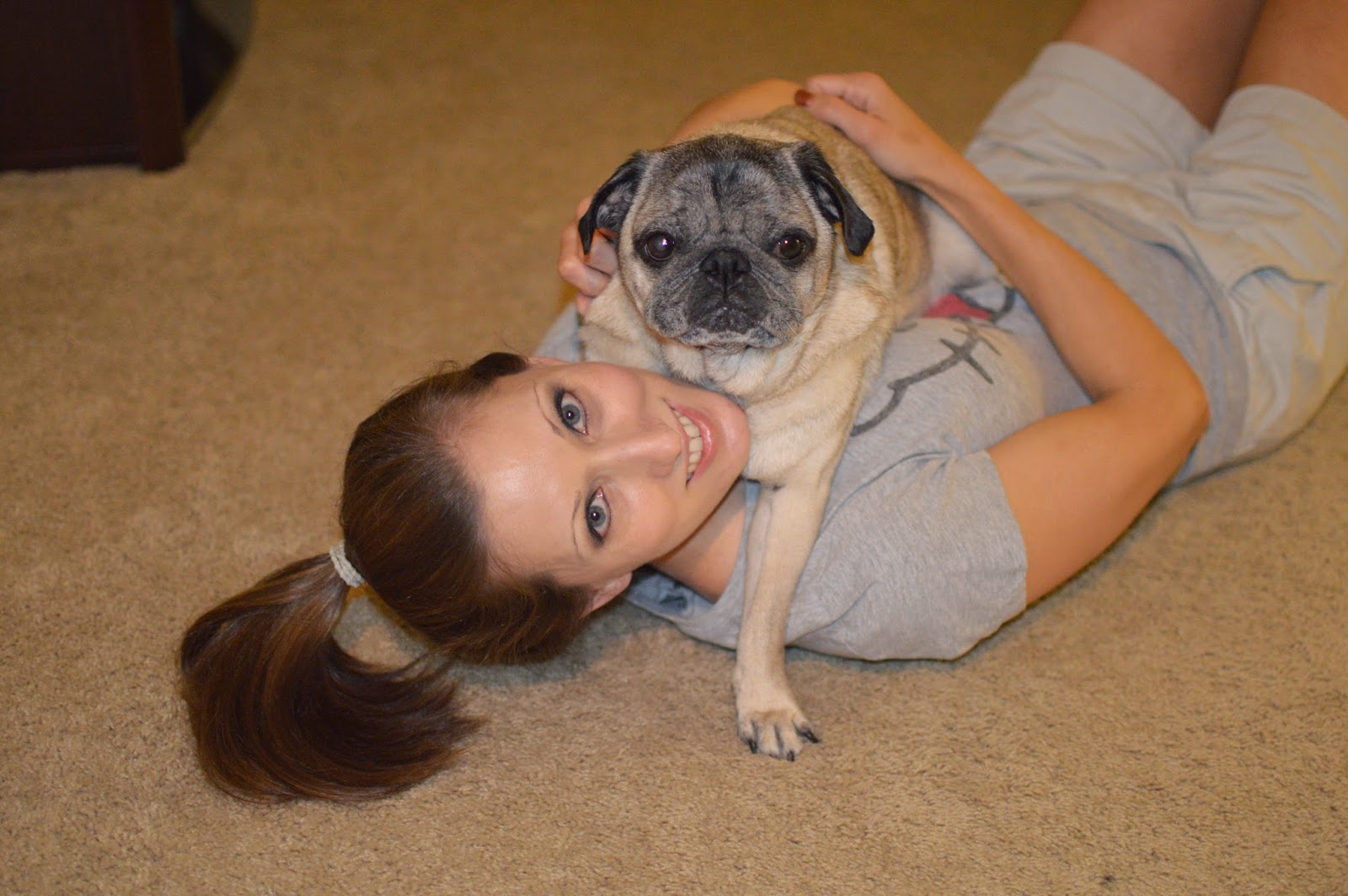 My husband and I got George a little over a year after we were married. I had been wanting a pug for awhile, ever since I read In Her Shoes by Jennifer Weiner. A pug features into the plot, and there was a photo of a pug on the back cover of the first edition printing. I just fell in love with the pug's sweet face, and started researching the breed. Despite a pug's snoring and shedding, I knew this breed was the perfect one for me. I wanted a cuddle buddy, a friend... and that's what I found when we met George.

My first image of George is seeing him chase after his mommy, trying to get at her teat. I knew instantly that was our George, or, as my dad liked to call him, the "food mercenary." Chapin and I had decided on the name "George" long before we met our George. In fact, Chapin gave me a stuffed pug on Valentine's Day 2004 that I named George. Right around Valentine's Day 2005, we had the real thing.


I had never had a dog of my own, and while George was a mischievous puppy, I immediately bonded with him. I was 26 years old, newly married, and George was my baby. Chapin and I wanted to take him everywhere, and he became the focus of our world. 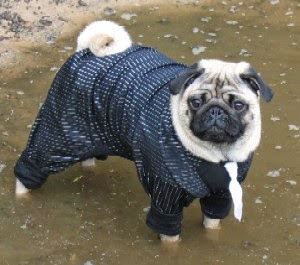 One of our favorite activities was attending the monthly Pug Meetup in Piedmont Park and seeing George run around with all the other pugs. Like any new parents, we of course thought George was the best guy around. He was not, however, that well behaved. During his first Halloween Pug Meetup, he had more fun playing in a mud puddle than any other pug there.

We quickly realized that George had his own unique personality. He was high maintenance - just like me - and went after just what he wanted. Most of the time, what he wanted was food... Mercedes the Cat's food at his grandparents' house in Alabama, crumbs off the floor at his grandparents' house in Alpharetta, pieces of apple from my plate at Taco Mac (whenever we took him along for trivia), meat whenever Chapin grilled. In fact, just a few days before he passed away, Chapin cooked chicken on our grill outside - a rarity for January - so George had his fill of flavorful bites.

George was also a big brother, first to Izzie, who passed away January 24, 2010, and then to Norman, who joined our family just one year ago.


I think secretly, though, he preferred to be an only pug. He loved getting all of our attention, whether it was cuddling on the couch, walking outside in the sunshine, or going to bed curled up in a "knee nook."

The Adventures of George, the Friendly Pug


As I think back now, I know George had a special life. Just check out some of this adventures!


When we lived in our loft in downtown Atlanta, he was one of the more popular dogs in the building. Everyone knew George (though they didn't necessarily know the names of his parents) and loved him. 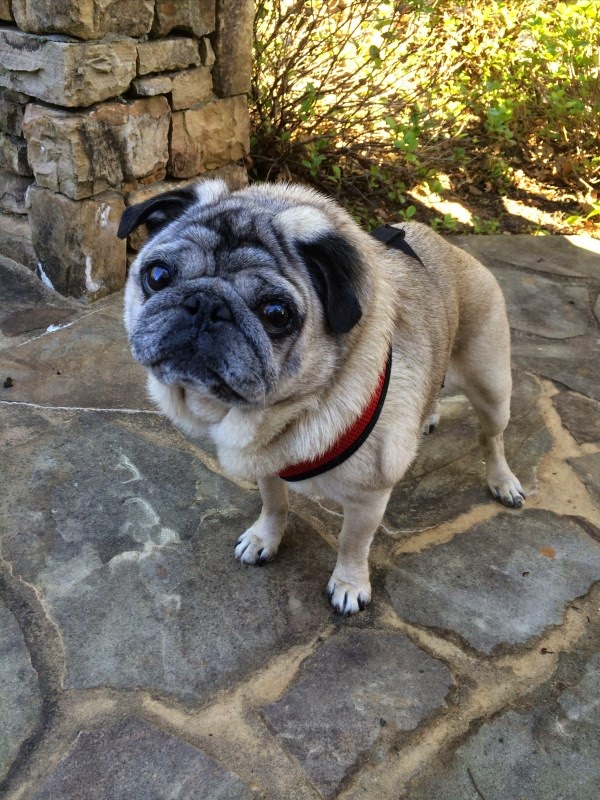 As he became a senior, and his back legs started dragging due to a bulging disc in his back, he didn't always know exactly when he had to go to the bathroom, so it became much more difficult to take him places with us. For the last few years of his life, we went to regular sessions at Atlanta Animal Rehab and Fitness, where he would walk on the underwater treadmill (only for peanut butter, of course). If we were early for our appointment, and he had to wait to go in to see Jonna and Kathrine, he would cry and whine. He loved those sessions and getting to eat peanut butter for 20 minutes straight.

I work very close to home, so most days I came home on my lunch break to walk George and Norman. On December 29th, 2014, I came home to find that George was not really acting like himself. His eyes were moving in an odd way and he didn't seem totally in the moment. I quickly called Chapin and he rushed him to the vet. I was convinced he was having a stroke, but the doctor told us he had the classic symptoms of something called Old Dog Vestibular Disease. I remember feeling relieved, thinking it wasn't that serious. Most dogs go back to normal and never have another issue.

While most symptoms of Old Dog Vestibular Disease dissipate in a few weeks, in some cases, symptoms can last longer, and that usually indicates the presence of a tumor in the brain or brain stem. That was the case with our George. 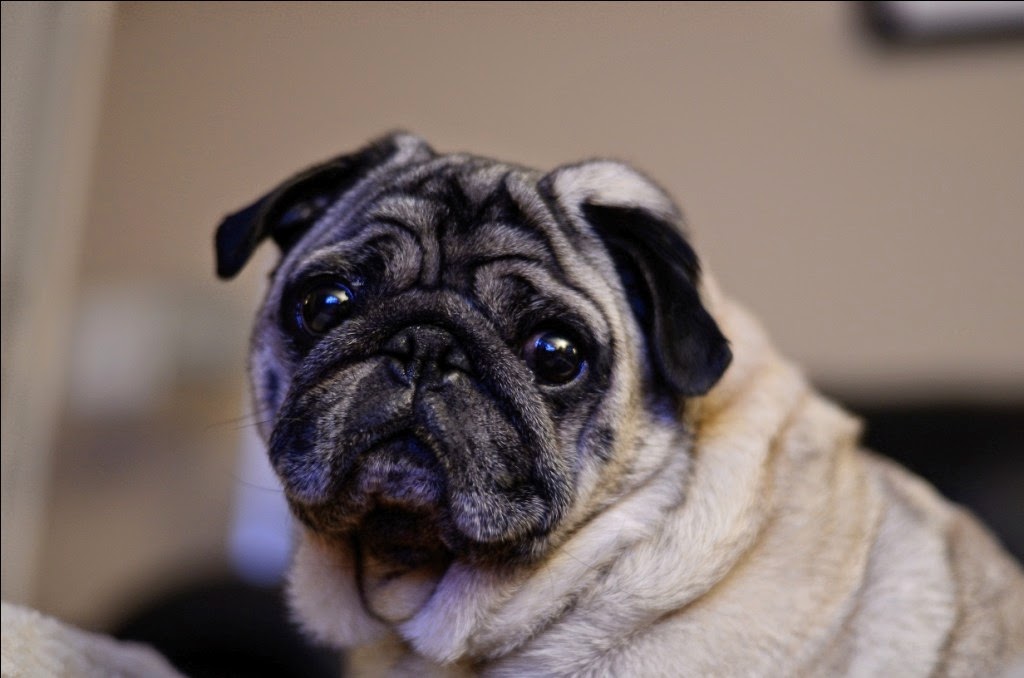 It's hard to see your dog experience the symptoms of Old Dog Vestibular Disease. From what I understand, it's a very intense vertigo, and with a dog, you can't explain what's happening. The first night, he thrashed around a lot, and Chapin and I barely slept. He would intermittently pant and shiver, and we did our best to keep him warm or cool him down. We kept calling the vet, but there was nothing she could do, no drug that could help him. It was torture to see him like that, and know I could do nothing for him.

George couldn't eat, so we fed him a combination of carrot juice and 'no sodium' chicken broth via a medicine dropper we bought as part of an emergency baby kit. After a few days, his symptoms did improve, and we could finally give him solid food again. We hand fed him most of the time, and gave him water via the dropper.

By the time two weeks had passed, though, we were still seeing symptoms, and George still couldn't walk well. Those two weeks had taken a toll on his back legs. All the muscles we'd worked up over the years at rehab were gone, and he could barely move them. He started losing muscle mass in other areas, too, because we had to carry him everywhere. We also noticed he was not blinking his right eye, and he would drool out of that side of his mouth. We soon realized he was almost entirely paralyzed on the right side of his face. 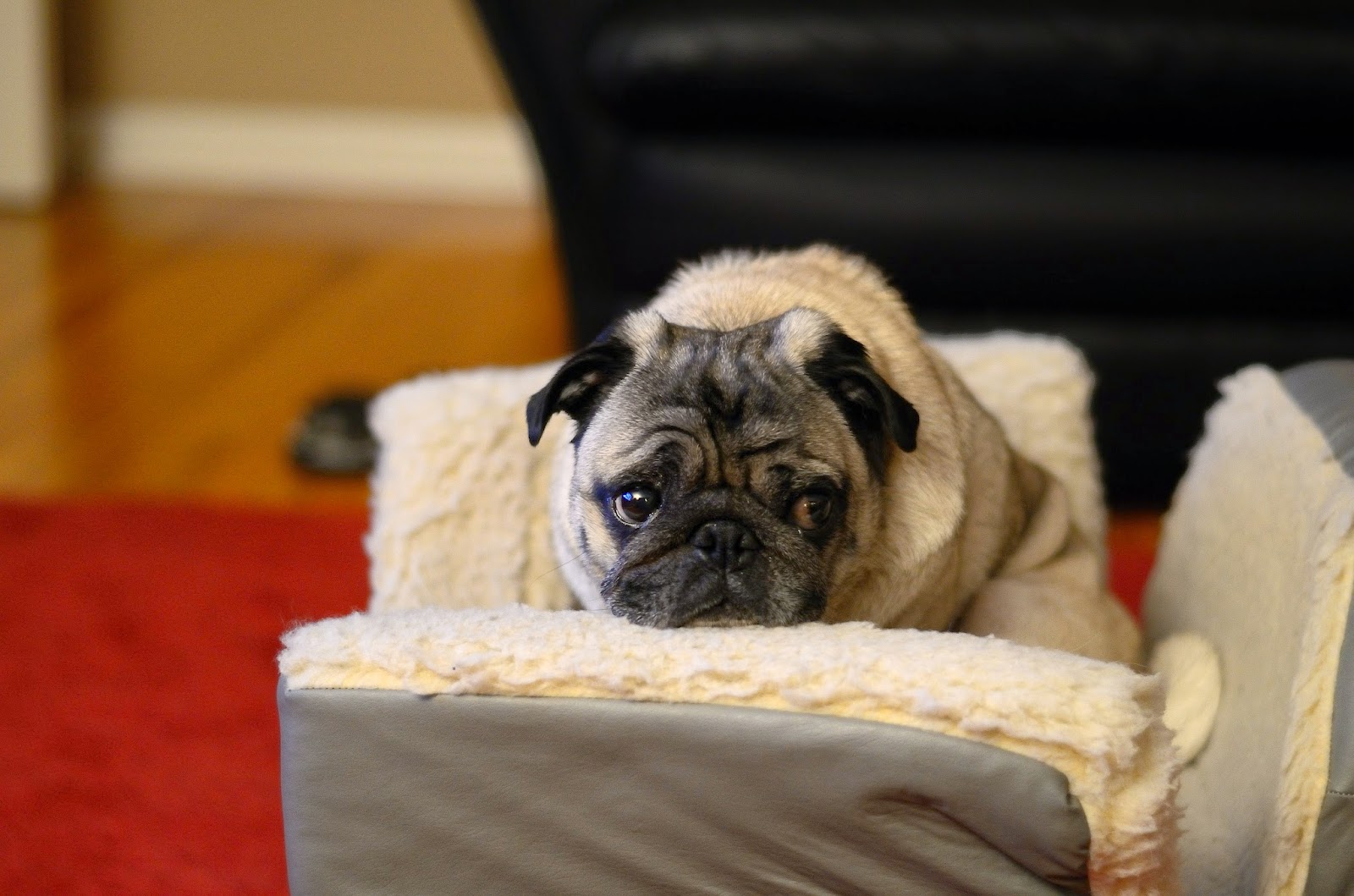 The evening of January 21, 2015, a little over three weeks after we first saw the vestibular symptoms, something changed. Chapin was out of town that evening, so the boys and I were just home watching TV. I had given George his dinner, and he'd eaten it with his usual gusto. Around 9 p.m., I took George outside, and noticed that he would not even stand up. I snapped my fingers in front of him, and there was no response. I held a treat in front of him - a treat! - and he didn't even try to sniff it or bite it. I knew something was terribly wrong.

The next day, I took him in to see the vet first thing in the morning. His normal responses were lacking, and our vet, Dr. Olga, recommended we take him to Georgia Veterinary Specialists (GVS). It was where Izzie had been treated (for pug dog encephalitis) and eventually died, nine months after diagnosis. I knew from Dr. Olga's face that things were serious, and I drove to GVS with a pit in my stomach and tears in my eyes. I was not prepared for what followed.

George failed most of his tests. The most troublesome: he had no gag reflex, meaning I couldn't give him water or food. I was alone dealing with the fact that my son was essentially gone. Every once in a while, on that last day, he would look at me with his good eye, and seem to know I was there. I cradled him in my arms for hours, talking to him about how much I loved him, and reminding him of all the adventures he had with us.


My favorite story: Chapin and I went out for a few hours, and unknowingly left the top on the dog food storage bin unlatched. He and Izzie got into that bin and ate and ate and ate. We came home and the two of them were lolling about, their stomachs so full they could barely move. It made us laugh even as we were scolding them.

I didn't have many options as I held my George on his last day on Earth.  I could not take him home, or he would starve. An MRI would tell us only what was wrong, and would not save him. The doctors gently told me that he might never wake up if we did do the MRI.

Many people don't like to be with a loved one when they pass, but I knew I had to be with George. Signing that paper was the absolute hardest thing I have ever done in my life, but George deserved to die in the most peaceful way possible. I had to be strong, to be brave for him. I held him in my arms, and whispered over and over how much I loved him. He quietly passed away around 4:15 p.m. on Thursday, January 22, 2015. I'm pretty sure I told him "I love you" about ten times a day for every day of his life, so hopefully he knew what he meant to me.


I'm not ashamed to say that George was the love of my life. It's the love any mother has for a child. George was my son, and even though he was only with us for ten years, he will remain a part of my heart forever.

It's amazing to think how much I've changed in the ten years we had George in our lives. Michele at 26 was very different from Michele at 36. I know I would not have felt as fulfilled as I have these last ten years without my George.

I search for George in the wind, or as I'm falling asleep in our all too silent bedroom (Norman doesn't snore). I search for him when I'm walking outside in the dark and the quiet that you only find at 5 a.m. The stars are so visible in the sky (even in the city), and I always seek out the brightest one. I like to think it's George, looking down on me. 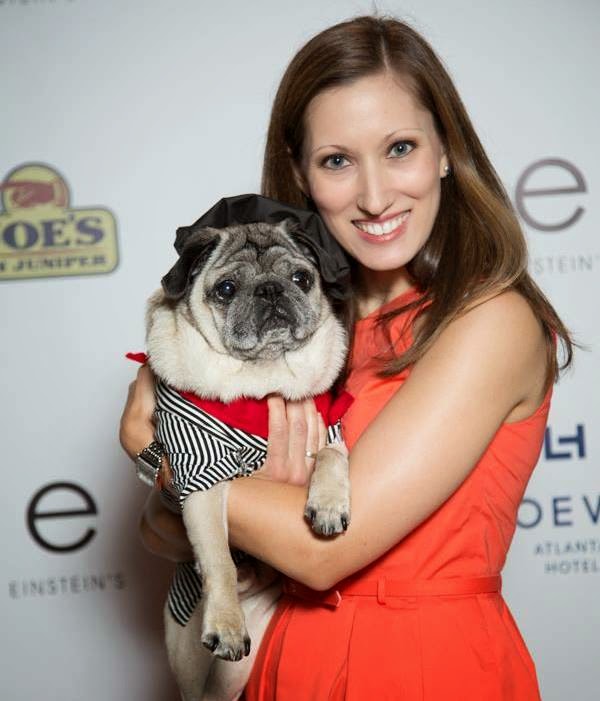 I am SO sorry for your loss. ( this made me bawl). I think you were so strong and loving and brave to ease him over the line. I wish you the best, now when your heart hurts so desperately, and into the time ahead , when your heart WILL begin to heal.Annie G.

I commented on Facebook, but I have been meaning to go back and link this - remember the first time AJ met George? She was so little! What a precious dog. I know it still must be so hard for you both. http://annajune.blogspot.com/2010/08/curious-george.html

Ooooh what a sweet baby pug he was! My dog had the same disease, but she recovered, after taking care of her very intensively. So sad this wasn't the case with you and George.