Mom and Me Time

As I get older, I feel like I appreciate my mom so much more than I ever did as a hormonal teenager or even as a "know it all" twentysomething. My mom and I have really gotten much closer the past few years, and she was there for me on the day I lost George - a day when Chapin was a plane ride away. She is the most kind and selfless person I know, and I love her so much.

Every so often, I can convince her to come into the city for a little shopping, and that was the case this past weekend. We met up at her favorite store, Belk, at Phipps Plaza. I'm a newer Belk shopper, and I will only shop at the Phipps Plaza location because this store has a huge selection of dresses, and brand names that are often featured here on the blog (for example, Trina Turk).

Saturday, we were bargain hunting, and she treated me to this French Connection dress ($25 marked down from $148). My mom may not understand my addiction to fashion, but she certainly understands the high you get from scoring a great deal!

It also comes in a maxi dress version. 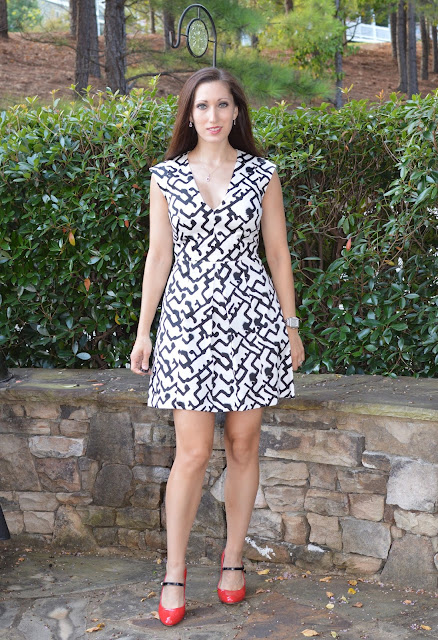 Tonight, Chapin and I are meeting up with our friend, Elizabeth, to see writer/director/actor Kevin Smith at the Atlanta Improv. I'm so excited! I have been a fan of Kevin Smith's for a very long time (about 20 years), and Chapin and I actually first met at a screening of his 1999 film, Dogma. Chapin is now addicted to his podcast, Hollywood Babble On. If I don't have time to change before we leave, I figured this dress would be casual enough for the Atlanta Improv.
Posted by Everyday Fashionista at 8/10/2015