I have an insanely busy week ahead of me, so I wanted to start the week off on a bright note... in this multi-colored Trina Turk confection. 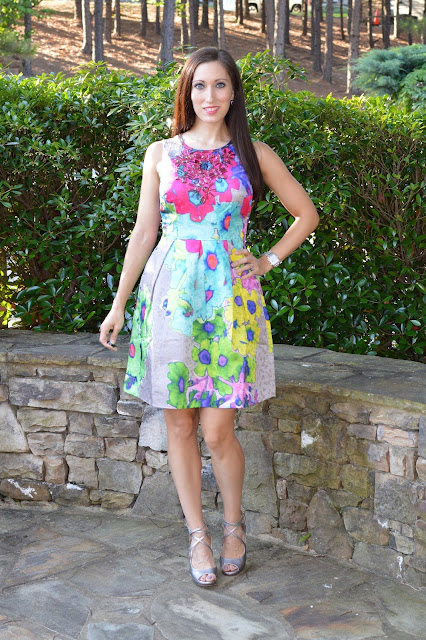 The vivid cacophony of colors is perfect for a bright sunny day in spring or summer. I feel good just looking at this dress, and the sandals I chose perfectly match the gray/silver hues.  Best of all, the bodice is covered in jeweled stones. It's just such a fun dress overall.

Chapin and I had a fun evening last night, attending the Atlanta Jewish Film Festival Icon Awards at the Woodruff Arts Center in Midtown. Lawrence Kasdan, a screenwriter-director best known for Raiders of the Lost Ark, The Empire Strikes Back and Return of the Jedi from the Star Wars series, and The Accidental Tourist, received the honor this year.  Here's a Q&A with Mr. Kasdan.

Afterward, we had a late dinner at Cooks & Soldiers near our home, and it was an amazing seafood extravaganza filled with:


The whole meal was fantastic. I even tried a drink with bee pollen as a featured ingredient. It was... odd! It's called the Mayhem Elektrikoa if you ever want to try it.
Posted by Everyday Fashionista at 5/23/2016