All I Ever Wanted

Chapin and I took a long overdue vacation this month -- our first real vacation in about three years. We've taken long weekends here and there, but it had been way too long since we escaped to somewhere far away for a full week to just rest and relax.

Our destination: The Cayman Islands.

We left Atlanta on a Saturday. The week leading up to our departure had been cold and rainy, so we were excited to get away. Chapin dropped Wally and Norman off at my parents' house, where they would spend the week following my mother's every move, and then we were on our way.

The flight to Grand Cayman from Atlanta is quick and easy: just two and a half hours. I watched Bad Moms on the plane, read a little of my book, tried not to annoy Chapin too much, and by then we had arrived.

Here are a few tips when traveling to the Cayman Islands:


Other than that, our travel to the Cayman Islands went very smoothly!

Once we arrived, we walked from our hotel to Coconut Joe's for lunch. I enjoyed a delicious salad with grilled jerk shrimp on top. The seafood there was wonderful during our entire stay.

After lunch, we spent a few hours at the beach. The days were short there, with the sun rising early and setting before dinnertime. After the sun was down, we enjoyed some live music and food (nachos) at the hotel. It was a good way to ease into our week in the Caymans.

Chapin and I were up early on our first full day in the Caymans for a scuba diving "refresher" with DNS Diving. Dive Masters Sarah (American) and Simon (Australian) picked us up from the hotel at 7:15 a.m. Chapin got certified in high school, and then went through the certification process again with me in August 2012. But after completing our open water dives in the Florida Keys, neither of us had been diving since.

That said, we needed a quick refresher. I had a minor freak out moment once we started descending, but was fine once we were under the water. It's not scary; it's more about controlling your breathing and feeling comfortable using the regulator. Plus, it had been over four years since our last dive. Scuba diving is definitely something you feel more comfortable with the more you often you do it!

We earned our dinner that night (scuba diving actually burns a lot of calories), so we decided to try another restaurant we could walk to: Craft Food and Beverage Co. This great gastro pub served a variety of different dishes. Chapin had the duck special and I had something called a Tuna Poke, which was basically a tuna and avocado seaweed salad.

Monday was the first full day we spent at the beach. We slept in, and decided to try breakfast at a local restaurant: Cimboco. We could walk there, and the food was excellent, especially the potatoes. I always wake up starving, so breakfast is essential for me.

We spent the rest of the day at the beach, just lounging, drinking and reading. The hotel offers beach chairs that are almost right in the water. You look up, and there's ocean. It was wonderful. Chapin and I agreed that it was the best beach from our (limited) travels. (We've also been to beaches in the U.S., Costa Rica, St. Thomas and Puerto Rico.)

Although we basically did nothing the whole day, we treated ourselves to a lovely dinner out at Agua Restaurant and Lounge. (Drinks like Pina Coladas fill you up, so I think we even skipped lunch that day.) It was a fancy place, so we dressed up, and we both enjoyed wonderful seafood for dinner.

I wore this cute Parker Holly Strapless Floral Lace Combo Dress for dinner out at Agua. You can still find it online at Saks and Amazon! I'm wearing a size small for reference. 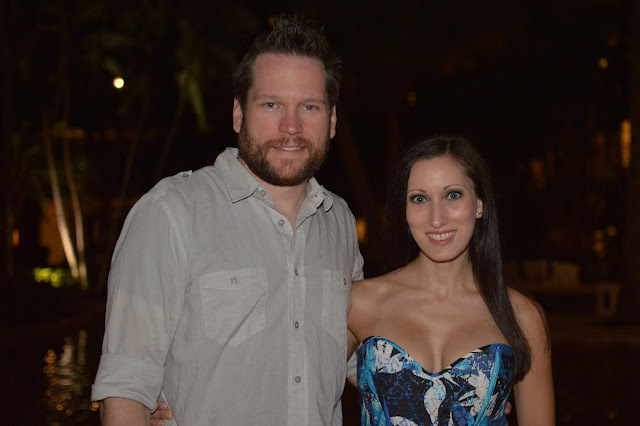 Tuesday, it was time for our first real dive of the trip. After feeling cold on the refresher dive, I decided to wear my wetsuit. The water was around eighty degrees, but it didn't feel that way to me.

A wetsuit is a smart fashion choice when scuba diving. It not only keeps you warm, but protects you from things in the ocean that can prick or sting you, like coral and jellyfish. (On my first open water dive in the Florida Keys, I was stung everywhere that wasn't covered by the wetsuit, mainly my neck, wrists and ankles. Thankfully, there were no jellyfish spotted in the Caymans.)

I was much calmer during the boat ride out to our first diving spot, though still a little nervous. The other divers, aside from Chapin, were two older American couples who had been diving for years. Talking to them definitely put me at ease.

We had great weather and the dives were both fantastic. We saw some amazing fish, coral reefs and even a turtle.

We were exhausted after diving, so even though we just spent the rest of the day at the beach, we ended up just staying at the hotel for dinner. It was a Mexican theme night! I wore this cute Blithe sundress and Coach Clarabel Studded Flat Sandals for the walk downstairs to the hotel restaurant.

Day 5: Reading for Me and Scuba Diving for Chapin (Wednesday, December 14th)

Chapin decided to get an extra day of diving in, but I wanted a day of rest, so we spent a little time apart on Wednesday morning. While Chapin was off diving -- he did Portobello and a drift dive from Lighthouse Point to Bonnie's Arch -- I stayed at the hotel, had a leisurely breakfast, and read outside.

I will say that we really enjoyed the coffee the hotel served. We found out later it was Paradise Coffee Grand Cayman. We even bought a few bags to bring home. Unfortunately, it seems like a hard brand to find in the States. Oh well! I will enjoy the coffee while I can.

I finished two books and started a third during the trip:

I just loved the Valley of the Moon, which I finished when we returned from the trip. But I read the majority of it at the beach, and just devoured every minute. I enjoyed The Rosie Effect and laughed out loud several times (though not as much as the original), tolerated The Singles Game, but loved Valley of the Moon.

Dinner that night was a bit of an adventure. We planned to go to one restaurant, but ended up at another. There was no signage out front, so we thought we were at the right place until we sat down, ordered drinks, and started looking at the menu.

We were actually at a restaurant called Le Vele, although we had planned to go to another restaurant called Casanova for some Italian food. It turns out, Le Vele had just opened, and we ended up enjoying the meal. I had a dish with three kinds of risotto on one plate!


After dinner, we had a drink and dessert at the hotel. It served this amazing salted caramel ice cream dessert that was worth every calorie!

We decided to do one last day of diving in the Caymans, and I probably enjoyed these dives the best out of all the dives on the trip. I was definitely starting to feel more comfortable under the water, and I had worked out the kinks on some of my first dives. (I was heavily weighted on the first dive. They had mixed up the weights for me and Chapin, so I spent most of that dive trying to stay out of the sand.)


After we returned from our dives, we walked over to Camana Bay, a shopping area with a movie theater, restaurants and retail stores. It reminded me a lot of Atlantic Station here in Atlanta. We ate lunch at Waterfront Urban Diner, grabbed some gelato at Gelato and Co., and walked around.

We had a little bit of beach time before it was time to shower, change and dress for dinner at Blue Cilantro. Chapin picked out the night's restaurant, and it was my favorite meal of the trip. It was an easy walk from the hotel, and the food and wine were wonderful. The sommelier even came over and chatted with us after praising us for our wine selection.

I wore this beautiful Black Halo Lopez Sheath Dress in hot pink for dinner at Blue Cilantro. I recently had it altered, and it fits my body perfectly. You can still buy the dress at Saks or in black at BlackHalo.com or Amazon.

On our last full day in the Cayman Islands, we decided just to sit back and relax. We slept in, had breakfast at the hotel, and spent the day at the beach. We snorkeled a good bit, and relaxed in the sand. It was a great day!


For dinner that night, we finally ate at Casanova, and it was wonderful. I wore another Black Halo dress for the occasion, and we got a great photo in front of the setting sun.

People complimented me left and right on this dress. Some woman even yelled a compliment across the street as we were walking back to the hotel after dinner. Too funny! You can still buy the Black Halo Jevette Sheath Dress at Saks Off Fifth, or at BlackHalo.com. It also comes in a navy blue if you don't like the "jigsaw rose" pattern I'm wearing.

We spent our last day in the Caymans at the beach, doing more snorkeling and just sitting by the ocean. Soon, we were at the airport and heading home to Atlanta and our pugs. Although I missed home, we had a wonderful week away, and I highly recommend the Caymans as a relaxing vacation destination.

Here's my favorite photo from the trip: our scuba selfie!

Sounds like a GREAT trip-thanks for posting!! (MAKES ME REALLY MISS THE CARIBBEAN !