Asian influences are again apparent in today's dress, a mock neck jersey sheath dress from Alice and Olivia. The dress is a little different for me, a total body print that manages to be sexy while barely showing any skin. Even my arms are covered to my elbows! 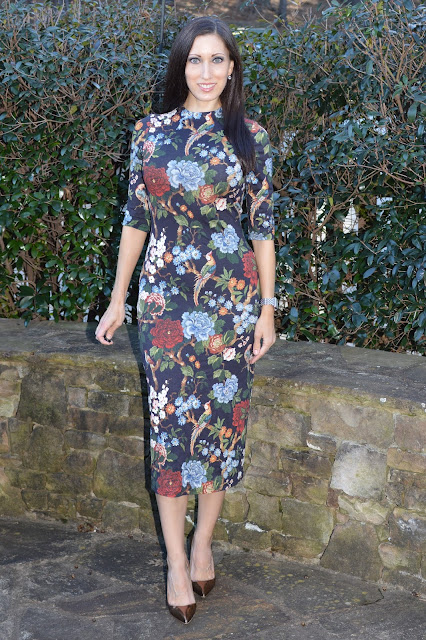 The print is called Chinoiserie Garden, a definite nod to the inspiration here. The dress is not only comfortable, but professional, and I feel so confident walking around in it. I also love the bold collection of colors; I played up the blues with my eye makeup and the more subtle golds and oranges with my shoe choice.

The dress must have been popular, because Alice and Olivia has released the same dress in a different print for Spring.

The dress was originally $330, but I snagged it on sale for under $100. You guys know I love my good deals. It's pretty much sold out everywhere now, but you can definitely find the new print at stores like Neiman Marcus. The dress comes lined, but I recommend adding some Spanx underneath for a little added confidence.

As Seen on TV!

The dress recently appeared on two soaps: one in the daytime (The Young and the Restless) and one in prime time (Riverdale). 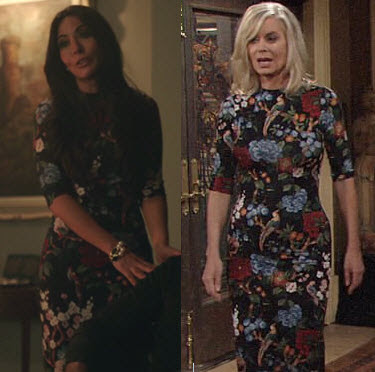 My sister, Gail, and I used to love to watch soap operas like The Young and the Restless and The Bold and the Beautiful. Our cousin later got us hooked on General Hospital during the Robin/Stone years. It's amazing to me how many actors are still on the same shows, 20 years later.
Posted by Everyday Fashionista at 1/25/2018

Beautiful on you! I agree about the soaps, amazing how the actors stay on the show so long!