I don't know if you've ever noticed, but all the titles of Grey's Anatomy episodes are also song titles. After yesterday's post, I thought I might try that myself for awhile and see how long I can go. I chose today's title because (a) I heard this REM song on the way to work, and (b) I am sort of dressed in the patriotic colors that Superman favors. I know it's a leap, but... just go with it. 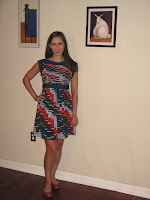 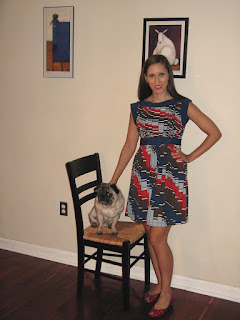 Today I'm in a BCBGMaxAzria mult-colored dress of blue, red, brown and white. I paired the dress with my red Stuart Weitzman flats and red Nine West purse.

I also thought I would try something different, since I'm sure you are sick of seeing me in the same two poses all the time. So I got a chair for George to sit on so he could be next to me. This is the only picture out of the ten I took this morning where George is somewhat looking at the camera. I've also included another shot of just me that is nicely centered (that's for you, Chapin).

I know it's weird, but I really like this outfit because I have at least three pairs of shoes that go perfectly with it. Today I choose flats because my feet are still hurting after yesterday's heels.