Chapin and I had a fairly low-key weekend. Saturday we tried to clean up the loft and do laundry, and later on met our friends, Jeanne and Matt, at one of our favorite pizza places for dinner: Fellini's Pizza on Ponce. Chapin and I like the Spinach Mushroom pizza, which has spinach, mushrooms, fresh garlic and extra cheese. Yum! I am not doing so well on my resolution to eat fewer carbs. Oh well. Pizza is so worth it.

Sunday was another relaxing day. It was cold outside, so we didn't really venture out aside from running a few errands early in the day. Chapin also made some delicious Vegetarian French Onion soup using the new soup crocks I got him for Christmas. 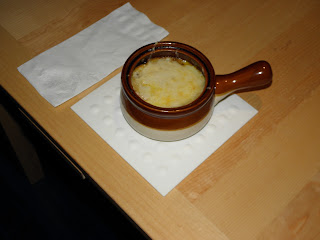 I have a weird diet -- I don't eat cows, sheep or pigs -- so this was the first time Chapin had tried a vegetarian French Onion soup recipe. But it was quite good, and I highly recommend this version! Of course, George wanted a bite, but onions are quite harmful for dogs, so all he got was a little cheese left on the grater.

A few hours after dinner, around 8 p.m., we realized it was snowing. Atlanta was, in fact, hit with a major winter storm last evening, January 9th, 2011. The snow and freezing rain continued into the morning, and schools and offices closed due to treacherous road conditions. With temperatures not planning to get above freezing anytime soon, we could be stuck at home for awhile. There is a sheet of ice on the road about 1-2 inches thick!

If you're not familiar with winters in Atlanta, you know this kind of weather is a big deal for us. We don't have the snow plows to deal with intense snow and ice, and there were quite a few accidents today. The newscasters keep saying, "Stay off the roads." So... that's what we are planning to do.

Since this site is dedicated to fashion, I will mention that I am spending some extra time in my pajamas the last few days. I am loving the two sets of PJ Salvage pajamas I received for Christmas. One has cupcakes on it, and the other has black and white sheep. They are both flannel and quite warm.

Wherever you are on this cold day, I hope you are safe and warm. Hopefully I will be back in my dresses soon!

big fan, i hope things warm up for you Can you put together outfit with black skirt, dark hose, pumps?
Great photos.