Britney Spears and the Deathly Hallows

Weekends are definitely my favorite part of the week because I get to spend so much time with the people who mean the most to me, like Chapin, George and the rest of my family. Plus, I get to sleep! Here are some highlights from this past weekend:

My mom and dad came into town to have lunch with me, and I treated them to some of the best pizza in Atlanta, which you can find at Antico Pizza near the Georgia Tech campus. The place was packed, as it usually is on any day of the week. We ordered the Pomodorini Pizza, which features basil, garlic, buffalo mozzarella and fresh cherry tomatoes. It is wonderful, and my parents -- who are both from New York and know good pizza -- enjoyed it as well. My dad was surprised at the prices, though; one pie will set you back $20... but I guarantee, it's worth it.

Chapin and I went to the movies on Saturday night to see the final chapter in the Harry Potter saga: Harry Potter and the Deathly Hallows, Part II. We are both huge Harry Potter fans, and while I understand why they needed to break the gargantuan last book into two movies, it has been torturous waiting so long for the second film to be released. Although none of the movies ever seem to live up to my imagination, the film version was still entertaining and a fitting wrap-up to a decade of story telling. We are planning to see the film again in the theater -- this time in 3D!


My little sister, Laura, and I had tickets to the Britney Spears concert at Philips Arena on Sunday night, so that was the highlight of my Sunday. Laura came over early, and Chapin and I took her to dinner at a new burger place we wanted to try: Grindhouse Killer Burgers. It felt like the times when Laura was still in high school, and Chapin and I would take her out for dinner or a movie. I don't think she could even drive back then, and now she is a married woman. Oh, how times change.
Our meal included burgers, sides (fried pickles and fried green tomatoes) and a "Boozy Milkshake" for me. I am not usually one to get such a fattening drink, but I had to try the Puddin' Out, which features pinnacle cake vodka, banana schnapps and nilla wafers. It did not disappoint, and was oh so delicious. In my book, that means it is worth the calories, guilt and extra time on the treadmill. Even after staying up so late for the concert, I was still up at 5 a.m. on Monday morning for my normal workout. The thought that my ass would be jiggling for a week made me bolt upright out of bed. I am not one for a jiggly ass!
After our meal, Chapin dropped us off at the concert. I always find it difficult to choose what to wear to a concert. Normally, I get really hot in crowds, so I like to dress lightly. I chose this Max & Cleo silver pleated cocktail dress because it is comfortable, cool and goes with my Frye Margot Studded Sandal Flats. Since I only own a few pairs of really comfortable and cute flats, and I since definitely didn't want to be in heels all night, that kind of sealed the deal. I even painted my toes silver to match. Ha! 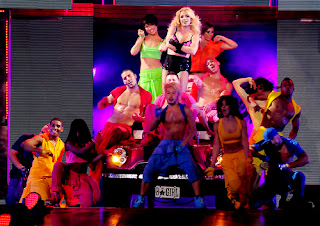 The show was almost completely sold out, and it was amazing to me how many people dressed up for the occasion. And I don't mean "dressed up" as in wearing dress. I mean, people were dressed up like Britney Spears, with many people sporting the school girl look from the "Hit Me Baby, One More Time" video.
We caught the second half of the opening act (Nicki Minaj), and then waited around until 9:15 for Britney to start her hour and a half set. Although I'm positive she only sang a few songs live, the lavish sets, outrageous costumes and beatific tunes made the evening so much fun.
Although most of the songs she performed were from her most recent album, Femme Fatale, she did do some old favorites like "Hit Me Baby One More Time" (just one verse) and "Toxic." I'm not normally a fan of such cotton candy pop music, but I like to work out to these tunes; with their strong beats and simple lyrics, these songs are perfect for motivating and moving. 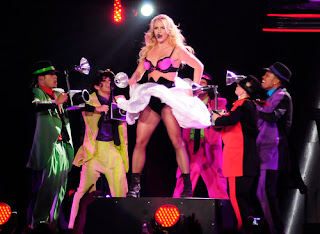 Laura and I both agreed that our favorite number was the one that ended the show: "Til the World Ends." All in all, it was a great night spent with my little sister.
Posted by Everyday Fashionista at 7/19/2011