July Fourth is such a fun holiday, usually lasting over several days and marked by lots of food, drinks, outdoor fun and, of course, the fashion. Who doesn't own red, white and blue clothing of some sort? I also love feeling such camaraderie with all Americans celebrating in the U.S.A. Like Thanksgiving, the Fourth of July is not a religious holiday, so everyone is able to get in on the fun and celebrate the birth of the greatest country in the world.


Chapin and I celebrated America's birthday, and the three-day weekend, with a lot of rest and relaxation. Chapin has been working so much lately that he wanted a quiet weekend at home, so I was quick to oblige. With my husband traveling so much, I have definitely been sleeping less, and it was great to catch up. Here is a rundown on our other holiday activities:


Saturday, July 2nd:
Pure and Pedicures
Saturday morning, Chapin and I slept in and had a late breakfast. After catching up on True Blood -- as fans of Charlaine Harris's Sookie Stackhouse books, we are shocked at the events so far this season -- and a quick workout (just for me), we finally left the house around 3 p.m. We went first to eat lunch at one of our favorite Mexican restaurants: Pure Taqueria in Atlanta's Inman Park.

My nail salon is directly across the street, so after our late lunch, we headed over to get pedicures. Chapin enjoyed his second pediure, although he complained that his pedicurist didn't make his toenails "shiny enough" (I laughed and laughed over that one), and I had my toenails painted a brilliant blue. The color is OPI's Teal the Cows Come Home if you're interested. Blue nails are very "in" this season.

After our salon adventure, we went to Whole Foods to pick up food for the weekend, which included: organic blueberries, watermelon, salad fixings, fresh guacamole fixings, fish and other healthy foods. Since we ate lunch so late, we didn't do much for dinner, but I did find room for dessert: a cupcake from CamiCakes! Chapin picked up several for me on Friday afternoon as a special treat for the long weekend. He sure knows the way to my heart.

Sunday, July 3rd
Good Food, Good Wine, Great Friends
Sunday, Chapin and I spent most of the day lounging around. I finished reading the $0.99 book I purchased on my Kindle (Miranda's Big Mistake -- a cute, if fluffy, beach read) and bought a few more for the upcoming week. I am only 15% of the way through my current book, J. Courtney Sullivan's Commencement, but I am already hooked.

I also bought A Pug's Tale, by Alison Pace, and Labor Day, by Joyce Maynard. I love reading! Labor Day is going to be made into a film starring Kate Winslet, whom I adore and who reminds me of my sister, Gail, and Josh Brolin, who will forever be Brand from The Goonies. I also spent the weekend reading the last few issues of Entertainment Weekly. 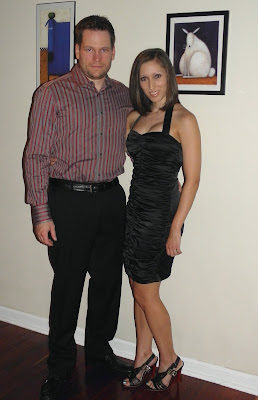 Sunday night, we met our good friend, Rahul, and his girlfriend, Vinnie, for dinner at our favorite Atlanta Greek restaurant: Kyma. We go to Kyma several times a year, and always request the same waiter: Marko. He is great and always brings us glasses of free Greek wine to try and impresses us with his knowledge of his homeland. He is also quite a salesman! We went through two bottles of wine plus several cocktails and seven different appetizers during our three and a half hours at the restaurant. We got so full on the appetizers -- I loved the zucchini fritters -- that we ended up splitting the fish special (Marlin). Vinnie, a vegetarian, was so full she didn't even order an entree! Suffice it to say we always have a unique dining experience when we go to Kyma.

Since this blog is focused on fashion, I have to mention the fabulous dress I wore to Kyma. It is the Black Halo Megan Ruched Halter Dress, and it was originally a birthday present for my sister, Gail. Since she didn't want it, I decided to keep it for myself. (Gail is so hard to buy presents for... she is getting a gift card for her birthday from now on!)

I love the cut of this dress because it is definitely designed to show off a woman's curves. Since it is a body hugging dress, the ruched detail is perfect for helping mask any imperfections. The dress is no longer available -- the style is about a year old -- but here are some similar dresses to try out if you like this look, and they are all available at different price points for any pocketbook!


Monday, July 4th
Happy Birthday, America!
One of my favorite July Fourth traditions is watching the Nathan's Hot Dog Eating Contest on ESPN. It is ten minutes of utter horror and shock as you watch the contestants eat up dozens and dozens of hot dogs and their accompanying buns. The most disgusting part for me is watching them dip the buns in water and eat the soggy bread. Gross! Joey Chestnut from California took the title (which includes the Mustard Belt and $20,000 in cash) for the fifth year in a row, eating 62 hot dogs and their buns in the time allotted. I don't know how he does it, but it's nice to have an American on top so consistently.

We didn't do much during the day but hang out. Chapin made fresh guacamole and opened one of our most expensive bottles of wine (from the Alpha Omega brand) as a snack while we waited on dinner to cook. Chapin makes the best guacamole I've ever had. He uses all fresh ingredients: cilantro, tomatoes, onions and avocados, along with lemon and other spices and things I probably don't even know about.

We have a fabulous stone mortar and pestle that we really only use for making guacamole, but it was worth it. I think it gives Chapin's guac that little something extra.

For dinner, Chapin was going to grill some fish and corn on the cob, but it ended up raining for most of the late afternoon and into the evening hours, so he baked our dinner in the oven instead. He made crab topped Halibut that came out just perfect. He improvised the recipe, so I can't even link it. We also treated George to a little crab. He loved it!

It was raining by the time the sun set, complete with lightening that lit up the sky as brightly as some fireworks, so we didn't end up walking to Centennial Olympic Park as we had planned. (Centennial Olympic Park and Lenox do some of the city's best fireworks displays.) But all in all, it was still a wonderful weekend. I hope you had a fun and safe Fourth of July as well! 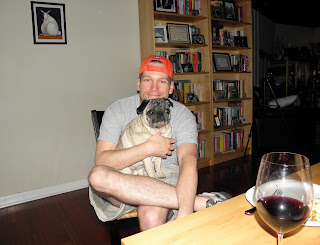