How to Marry a Vampire

My office closed early on the Wednesday before Thanksgiving, so I was able to meet up with both of my sisters for a showing of The Twilight Saga: Breaking Dawn: Part 1. I had other movies higher up on my "must see" list, but my little sisters were insistent, so we watched Bella finally marry her vampire love, Edward.

As a fashionista, I was excited to see the wedding dress chosen for the film. There was a lot of speculation over the designer and the overall look of the dress leading up to the film's release, which made me all the more curious. 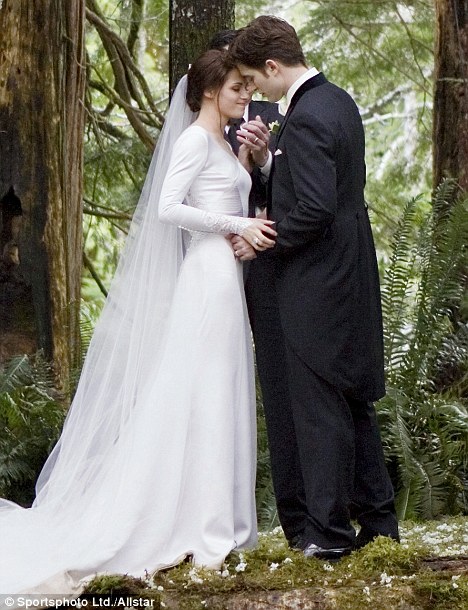 The designer is the ultra-glam Carolina Herrera. I often associate Ms. Herrera with Renee Zelwegger, who is frequently seen in the designer's creations for red carpet events. Ms. Herrera has been a staple of the fashion industry for years, and even dressed cultural icon Jackie O, so I think she was a good choice. Her designs are usually hit or miss with me - I either love them or hate them - and as you will see I had mixed reviews of the wedding dress for this film.

Ms. Herrera said of the wedding dress for Bella in Town and Country Weddings:


"I took into consideration the character of Bella and Kristen’s portrayal of her, and what this fantasy character would choose to wear for the most important day of her life."


The dress is probably being knocked off around the world for all the adoring young brides who so love the series. To be honest, though, I felt the dress was a little matronly when viewed from the front. Bella is supposed to be an 18-year-old bride, and I'm not sure the long sleeves and high neck were age appropriate.

The back, though, is where you see some sexiness and youthfulness come into the design: 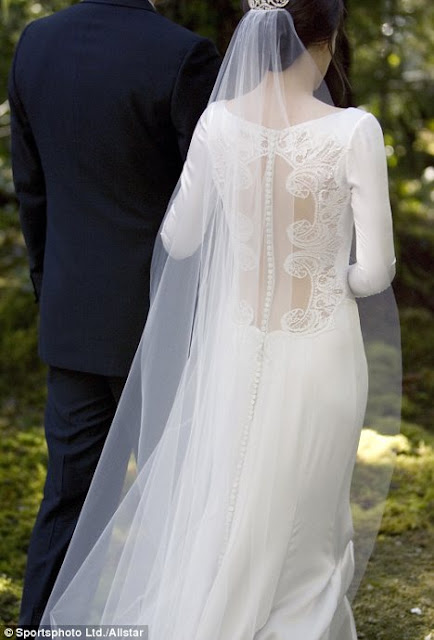 I love all the beading and detail in the dress, and the long veil is simply breathtaking. I even like her hair piece! In a year of famous wedding dresses (hello, Kate Middleton), I think this one stood out, although it's probably not ever going to make my list of the most beautiful wedding dresses in the world.

As for the movie itself, I am Team Edward, but you had to feel sorry for Jacob, who I am happy to report takes off his shirt several times during the movie. These young actors sure have stunning bodies!

Chapin and I read this series of books several years ago during our annual car trips. (I read aloud to him while he drives.) The books are not well written, and the movies are not much better, a combination of over-the-top acting and cliched dialogue. This movie at least had the mention of sex, which the previous movies lacked. It was written by a Mormon, after all.

Still, I would have rather seen The Muppets.

On a final note, let me just say as a forever Buffy-Angel fan... where were all these vampire crazed fans during those shows' runs? That show had all the ingredients of The Twilight saga taken to the nth degree:

If you are a Twilight fan and have never watched an episode off Buffy the Vampire Slayer or its spin-off, Angel, please do immediately!