Long Weekend in the Mountains 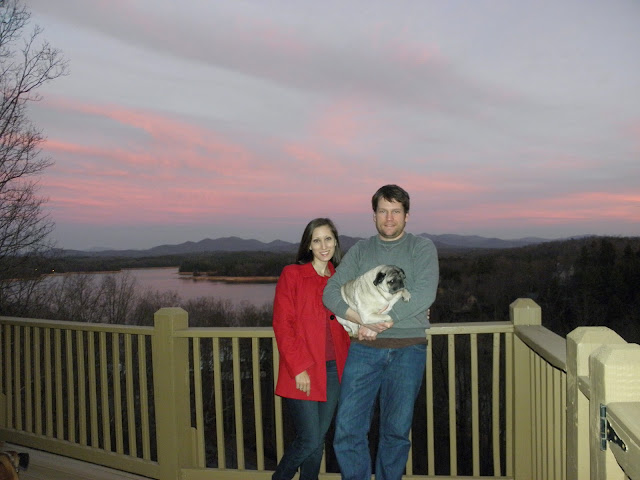 The weekend after Thanksgiving, Chapin and I traveled a few hours outside Atlanta to enjoy a long weekend in the mountains with some friends. Although we called it a "cabin," the house we rented in Blairsville, Georgia, was huge, with four bedrooms (a TV and bathroom for each), a game room, living room and enormous kitchen. I don't even know why we started calling it a cabin, because even the website refers to it as "Majestic Lake Manor." 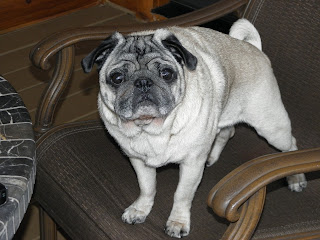 It was a fun weekend, filled with lots of game playing, outdoor walks, reading and... eating. All the couples took turns cooking, and since I don't cook, I assisted Chapin or mainly just helped clean up after all the meals. Rahul made everyone a personal omelet on our first morning, and the next morning, we had shrimp and grits from Kate and Russell. The dinners were divine as well: Chicken marsala a la Chapin one night, and pasta with a Turkish twist on another. I'm sure I gained five pounds just from that weekend alone! I also discovered a great new game that I ended up buying myself when we got home: Bananagrams! As a Words with Friends fanatic, this game is perfect for me!

One of the biggest perks of the "cabin" was that we could all bring our children with us -- our dog children, I mean. George definitely enjoyed the different scenery, and he was generally well behaved... except when we would sit down to eat. He would go around the massive table (it sat ten, I think) to each person, begging for food. Chapin and I were so embarrassed, but that's George for you. We have never been able to break him of this habit. I still remember the day we saw him for the first time. He and his brothers and sisters were all playing together and running after their mama. Well, George was the one running after his mama to get at her teat! 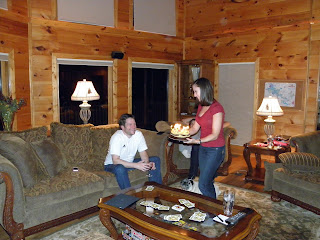 Chapin actually celebrated his 35th birthday during our cabin weekend, so we surprised him with a chocolate and peanut butter cake. I think he was amazed we fussed over him so much, but it's an important birthday, and we couldn't let it go by without at least acknowledging it. He got so embarrassed when we sang "Happy Birthday" to him, but I think he loved it, too.

I spent most of the weekend in jeans and t-shirts, which -- as readers of this blog know -- is not normal for me. The outfit I wore in most of the pictures here was probably my favorite: Paige Premium Denim Skyline Skinny Jeans, v-neck t-shirt from INC International Concepts, Old Navy red ruffle coat (last season).

It was a great weekend that I hope to make an annual tradition!