It's the holiday season, and what better way to celebrate than by giving a lonely little dog a new family. So, without further adieu, meet our new addition: Walter, or Wally for short. 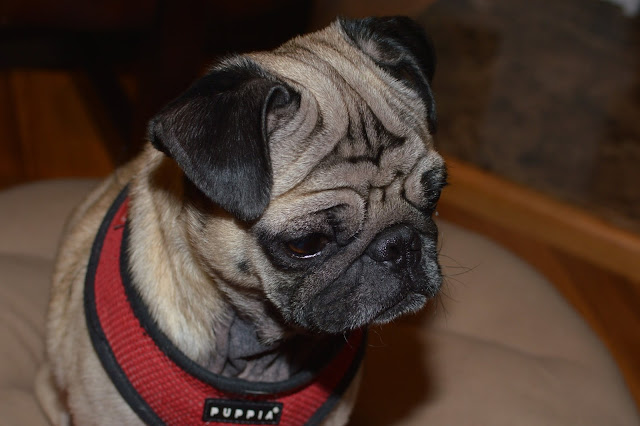 Here are the details:

Where we found him: Clayton County Humane Society (via Petfinder).

His situation: All we know is that he was at the Clayton County Humane Society for about a month. His past owners, who called him "BJ," short for "Bentley, Junior," gave him up. We have no idea why. I don't know how anyone could part with this sweet little pug.

Health: Overall, Walter is in fairly good shape - no heartworms or fleas. His main health issue is a skin condition. He doesn't have any fur on his chest, which you can see in the photo above. We are starting him on a grain free diet to see if it helps. He's also underweight, and probably malnourished. He could have something like Celiac Disease, where his diet is preventing him from properly absorbing nutrients.

The name: It took us a looooong time to decide on Walter. Many people suggested Cliff, because of the Cheers reference (Norm and Cliff), but I'm not a big fan of that name. We knew we wanted a nerdy, old man type of name, so after a lot of back and forth, we finally narrowed it down to Jack, Walter and Henry. Last night, I came home, and Walter watched me walk across the room. Chapin said he was wall-eyed, so it looked like he wasn't really focusing on me. I said "Wall-eyed...Wally! That's it!" It's also the name of my favorite Pixar character, Wall-E. It does seem to suit him.

Personality: He's only been with us for a few days, but so far, Walter is fairly quiet. He loves, loves, loves my husband, but doesn't seem so sure about me and Norman yet. It probably doesn't help that Norman is always in his face, and I'm always at work! 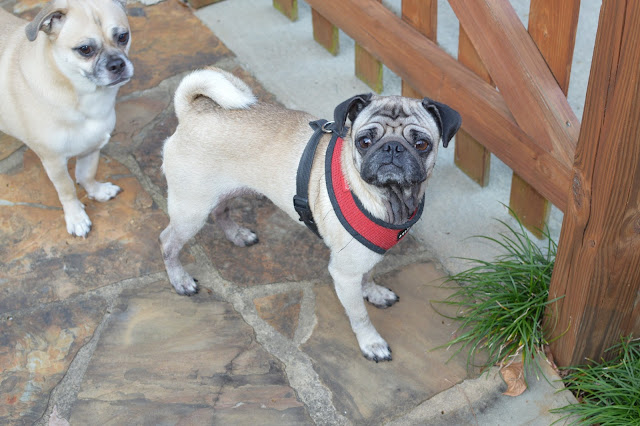 He is house broken, and walks very well on the leash. He doesn't like being crated during the day, but he could be a little traumatized from his time at the humane society. Hopefully, with time, we will see more and more of his little personality.

I was talking to my sister, Laura, last night, and we both agree he looks like a combination of George and Izzie. He even has snarled bottom teeth like George, which I always loved so much. 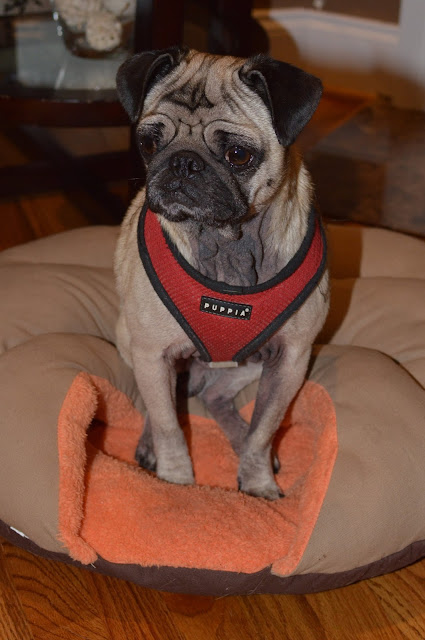 Walter is fitting in well with our family already. My mother-in-law texted her congratulations earlier this week, saying "Walter is one lucky pug!" We hope he agrees.

Hello, Walter! ( My oh my, he DOES have the MOST wrinkly/sad/worried visage I have ever seen on a dog! Really, rather comical, and endearing !!) I am sure that a loving bond is being forged daily between Walter and the whole family! These poor wee dogs that have been given away have gone thru such a a major trauma! He will certainly respond to your good treatment of him, and will learn to trust and love again. And, I am sure that a day will come when you will wonder how you ever lived without him ! Congratulations!