Here's a quick rundown of how I spent Thanksgiving 2016:

Chapin and I took Wednesday off, packed up the car, and drove the seven hours or so to New Orleans to spend the holiday with Chapin's family. Our boys came along, too, and were fantastic in the car, mostly sleeping... though there was some occasional whining (mostly from Wally). We bought the boys new Sleepypod harnesses, which are supposed to be safer than the Puppia harnesses we have used in the past. Here is Wally in his orange harness. 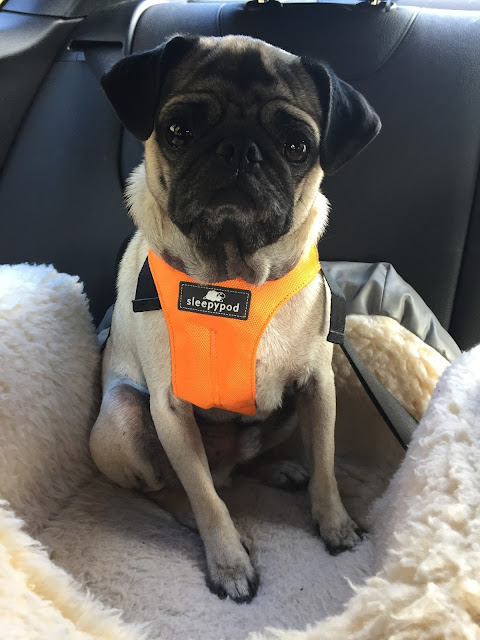 Wednesday night we had dinner at a great Mexican restaurant in New Orleans called Mizado Latin Kitchen. I loved trying all the different types of salsas, and the food was all so good.

We spent Thursday at the Gibbons house in New Orleans, watching the Thanksgiving Day Parade and the National Dog Show, chasing Pokémon, sipping wine, playing with Wally and Norman, and eating (of course). Here are our two nephews with Wally and Norman during one of our Pokémon Go excursions. I don't play the game because I'm worried I will get addicted, but at least it's good exercise! I enjoyed spending the time outside with my nephews, too. They are growing up so fast, and are just so adorable. They loved on Norman and Wally so much and really tired them out. 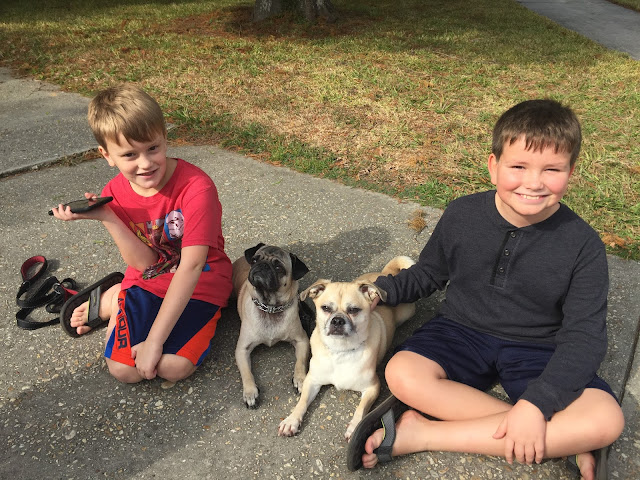 We headed back to Atlanta on Friday, so we were in the car most of the day. I read a new book aloud to Chapin on the drive, so that kept us occupied, and the drive (both ways) went much faster than I expected.

The book is Dark Matter: A Novel, by Blake Crouch. You will like this book if you liked the TV show, Fringe. It's about parallel universes and how they intersect for one particular man. Chapin and I found ourselves yelling to each other regarding some of the choices the main character made, but it definitely kept us entertained.

By the time we came home, I was exhausted, so I put on some music and a face mask, and just relaxed in the tub for a bit. We ordered in -- Indian food from Tabla -- and spent the night relaxing. I also watched the first episode of Gilmore Girls: A Year in the Life. I had been looking forward to watching the show (just four episodes) for months and months!

I spent most of Saturday watching the next two episodes of Gilmore Girls: A Year in the Life. I loved snuggling on the couch with my boys, some coffee, and Rory, Lorelei, Emily, Paris and the whole gang from one of my favorite TV series of all time. Gilmore Girls is one of those rare TV shows I revisit every few years. I'll watch the whole series again, from start to finish. I do that with just a few shows: In addition to Gilmore Girls, I like to re-watch Buffy, Veronica Mars and Sex and the City. See, it's a very short list!

Here I am on Saturday morning in my Urban Tee Farm Gilmore Girls t-shirt, some coffee in my pug mug, and Wally and Norman in their usual spots on either side of me. It's such a relief that they are getting along! 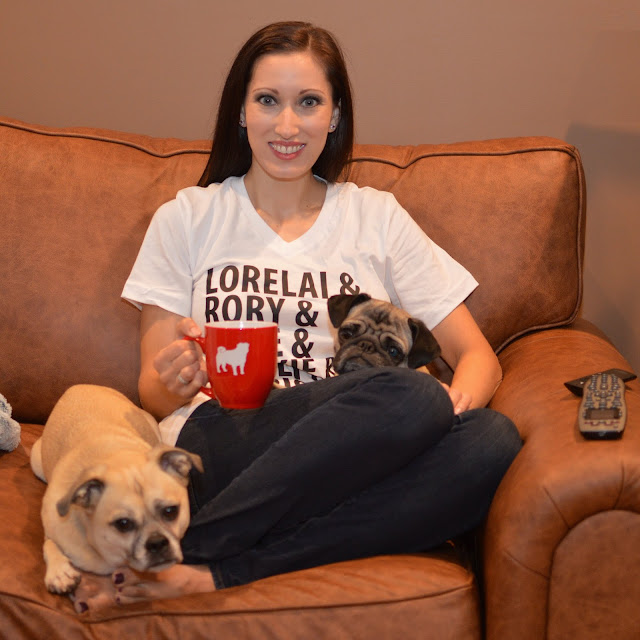 Chapin and I also managed to squeeze in some food (pizza at Amazza -- yes, mom, they have gluten-free crust!) and some shopping on Saturday afternoon. After spending two nights at a hotel with the boys, and sleeping in a king-sized bed, Chapin and I decided that we finally needed to upgrade the queen-sized mattress we've had for years. Having both boys in the bed is wonderful, but they take up a lot of room, and Chapin and I haven't been sleeping too well. We bought ourselves a new Sleep Number bed, and we are so excited. I guess you know you're getting old when buying a new mattress brings you this much happiness!

I saved the last Gilmore Girls episode to watch Sunday morning, and after crying my way through most of it, I called my sister, Gail, so we could dissect the ending. It ends on a cliffhanger, and I'm really hoping they end up making more episodes at some point in the future. It's been so wonderful to revisit the series in this way. Thank you, Netflix!

Sunday, the last day of our vacation, was mostly about errands: buying our Christmas tree, decorating, grocery shopping, cleaning, laundry, etc. It was the right way to end our relaxing Thanksgiving break.