Bow ties in women's fashion are all the rage lately -- everyone from Elle Fanning to Drew Barrymore has been spotted sporting some type of bow tie -- and I am certainly embracing the trend. After wearing a black Alice + Olivia bow tie dress a few weeks ago, here I am in another tie-neck dress, this time via a silk creation by Diane von Furstenberg. 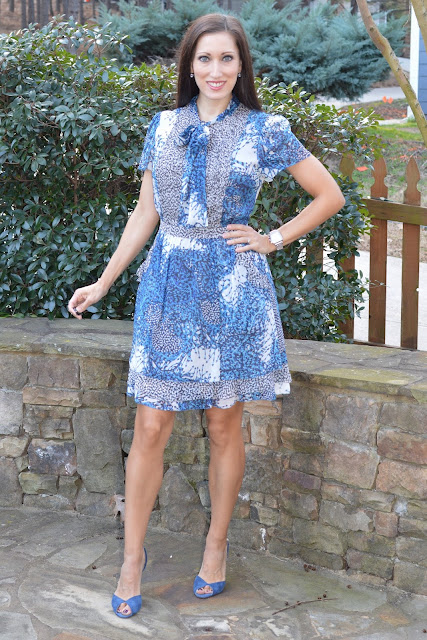 Although I normally shy away from silk dresses -- they are so frail and tend to easily wrinkle -- I just fell in love with this sweet silhouette. I love the blue print, and the dress overall is so easy and comfortable to wear. Plus, it looks really professional without being too stuffy.

Celebrity Sighting!
The dress has been worn on two TV shows lately: Once Upon a Time and New Girl. Photos via WornonTV.net, a great website if you're wondering where to get the clothes you see on your favorite TV shows. (My favorites: the women on Pretty Little Liars and whatever Zooey Deschanel is wearing on New Girl.) 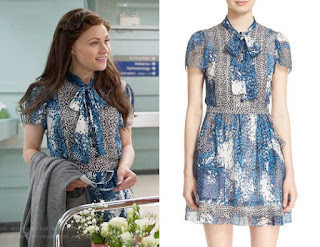 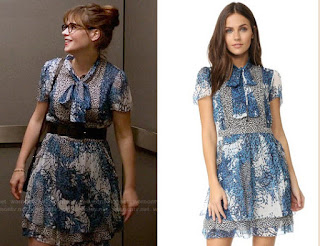 Even though it's only Thursday, I am so ready for the weekend. Work has been incredibly busy, and I know I'm not getting enough sleep. I can't wait to curl up with a book, my hubby and two little pugs and just relax. I recently started The Girl Before, by JP Delaney, and I don't want to put it down. I don't get much time to read during the week, and despite some overarching cliches weighing down the narrative, I'm excited to see how the story plays out. It's like nothing I've ever read before, and -- apparently -- Hollywood agrees. Ron Howard is already in line to possibly direct the film version.
Posted by Everyday Fashionista at 2/02/2017