In honor of Throwback Thursday (#TBT), I decided to wear this long-sleeved DVF dress today. The Chevron print and mix of bright colors -- especially that shade of orange/brown -- really take me back to the 1970s. A colleague of mine actually said it looked like I'd stepped off the set of That 70s Show, so I guess I'm not the only one thinking of disco balls and bell-bottoms. 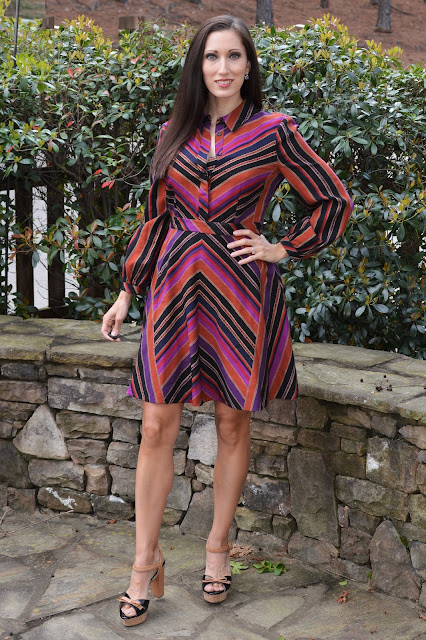 I'm not a huge fan of fashion from the 1970s, but today's dress, which seems straight out of that era, is an exception. I think maybe I've been inspired by FX's The Americans, which takes place in the early 1980s. Chapin and I have recently been binging seasons 3 and 4, which are incredibly well-written and compelling, and seeing the fashion from that time is an added bonus. (I also spotted a box of Banana Frosted Flakes on a recent episode. Who knew that was ever a thing?)

I like how the dress has a 70s print but definitive modern vibe, with the fitted waist and long sleeves that I've been seeing on a lot of dresses lately.

According to one of my favorite websites, WornonTV.net, the dress was recently seen on Abigail Deveraux on Days of Our Lives. I used to sporadically watch this soap in the early 1990s, and apparently Abigail is the daughter of Jack and Jennifer. They were my favorite couple on the show. 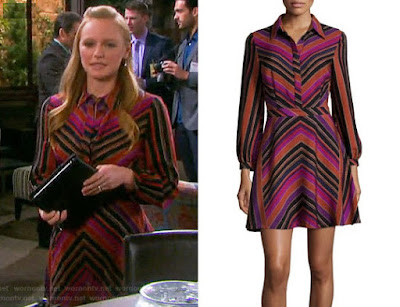 Diane von Furstenberg is primarily known for designing the wrap dress, which she wore on the cover of Newsweek in 1976. I have one DVF wrap dress, but I don't wear it very often. It's form fitting and really better suited for women who don't have curves. (It can actually help create them.)


I've been pleasantly surprised by recent DVF designs, though. I haven't worn the brand in years, and suddenly I want everything I see. Fashion works that way, I guess!

As you can see from this second photo of the dress, it is WINDY today in Atlanta. After a slew of storms hit yesterday, one after the other, today we woke up to lower than average temperatures and high winds. The wind succeeded in knocking another tree down, so I'm going home to a house without power (the whole neighborhood is out). Hopefully it will be back on before the sun sets; I don't want to spend another 20 hours without power. 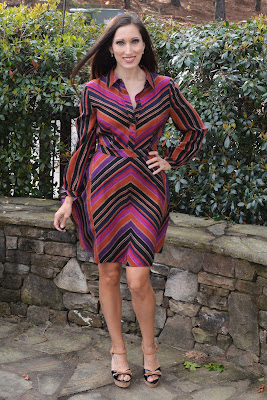