As planned, Chapin and I had a low-key weekend. Although I had been debating making the four-hour drive to see my sister in Nashville, my parents decided to go instead, and asked us to stay at the house in Alpharetta to take care of my grandfather for the weekend. As city folks, there are two main things that affect us when we're out in the suburbs:

First, George isn't used to all the suburb sounds. Every time a bird chirps, or he sees a jogger or other dog passing outside, he starts barking away. He is more used to zooming cars and police sirens! You have to remember that he has lived in our city loft since he was a just wee pup. It's hard to believe he turns six years old this December. 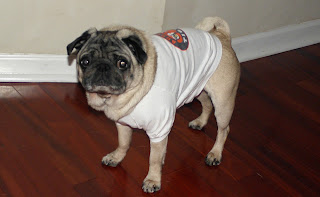 Second, my ears ring! I am just not used to all that silence.

Anyway, we ended up having a very nice weekend. Auburn beat UGA in a very stressful game, we enjoyed Thai/Chinese food from Lon U with my Grandpa, and we came home early enough on Sunday that we still caught a movie - albeit a bad one (Due Date). Here's to relaxing weekends...
Posted by Everyday Fashionista at 11/15/2010