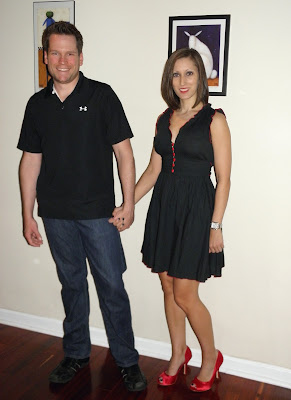 Chapin and I are usually inseparable during long weekends, and Memorial Day Weekend 2011 was no exception. Although we usually spend long weekends in Daphne, AL, visiting with Chapin's side of the family, this year we decided to stay home. Chapin has been traveling so much for work, that he just wanted a long weekend at home to kick back and relax. I really don't blame him! But it was the first Memorial Day weekend in at least six years that we spent in Atlanta. It's crazy how time flies.

Chapin and I tried to relax as much as possible, and I think we were successful. We did get out a little, though. Here's a rundown of our activities.

Friday night we went to see The Hangover II. It is very raunchy, and some scenes continue to haunt me, but it did make me laugh, and it was fun to see the boys back in action. Chapin and I watch the original any time it comes on HBO, so let's just say we've seen it quite a few times...


Saturday we went to a cookout at a friend's house, and though I got three huge, itchy mosquito bites (the bugs love me), it was fun to catch up with friends. Chapin grilled turkey burgers with Swiss cheese. I love that combination! I let Chapin pick out my outfit, which was probably a mistake: little shorts (Old Navy) and a little purple top (Victoria's Secret) with lots of cleavage. Suffice it to say there's no picture of that outfit.

Sunday we went out to dinner (Twist at Phipps Plaza) and caught another movie, Bridesmaids. Some people have called Bridesmaids the female version of The Hangover, and it is really funny with a lot of poo humor, so Chapin really enjoyed it as well. I also wanted to mention that Twist is doing a $10 all you can eat select menu that is fabulous. I'm not sure if they offer it just on Sunday nights, but what a deal!

The picture above is us on our way out. I love Chapin's smile in this photo. He looks so handsome.

I am wearing a dress called the Have a Heart Dress from a small brand called Sugarhill Boutique. I have never worn a dress or other item of clothing from this brand, so it was a new adventure for me. I love the red accents (especially the buttons) on a typical, black A-line dress. 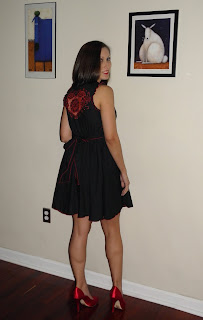 And now for the best part: the back of the dress is a heart cut-out. You can sort of it see it in this picture. And check out my calf muscles! It's always interesting to see yourself from the back.

I am also wearing BCBGMaxAzria pumps in a bright, fun red. I have had these shoes for about two years, but have never worn them because I forgot I had them. Yes, I think that means I have too many shoes!

This dress also represented my first purchase from the site, ModCloth.com. The site tends to skew a little younger, but has a fabulous selection of dresses, accessories, shoes and more. Most of the items are very cutesy and feminine - a perfect match with my style. I also like the site because the owners have a pug named Winston, who appears sporadically throughout the website. Here is a snippet from my order confirmation e-mail:

We ended the weekend with a barbecue at my parents' house in Alpharetta. My mom served a huge fruit salad, and I so enjoyed the watermelon. I guess it really is summer now!
Posted by Everyday Fashionista at 6/02/2011