This week has been terribly hot here in Atlanta, hitting about 95 or 96 degrees every day. The mornings are not any better; even at 7 a.m., it's already 80 degrees out. Poor George has not been able to get too much exercise because he can't be out in the heat too long. After about 10 minutes, he is already huffing and puffing due to his thick fur coat and non-existent snout.

One of my favorite things about George is that he knows what he wants. Usually what he wants is food, but there was one time, when he was a year old, that he wanted to cool down. It was a hot summer day in June 2006, and we went to a gathering of the Atlanta Pug Meetup group. It meets once a month, usually at Piedmont Park.

That year, during the summer months, we would go to some of the members' homes, who would have lots of drinks and sometimes doggie ice cream treats on hand for the pugs. This particular meetup featured a small swimming pool. George was hot, saw that pool, and promptly plopped his butt down right in the middle of it. Soon, the other pugs followed suit, but George was the first. Yep, I guess he takes after his momma in knowing what he wants and how to get it.


Sometimes I find it difficult to dress appropriately for the weather during the summertime. Most places blast air conditioning so low that I tend to freeze in a little summer dress or lightweight outfit, and have to carry a cardigan around in my bag 24/7. Other places, like my office, have the air conditioning on low, so that I tend to be a sweaty mess by the end of the day. I think I may have caught a cold from all this hot to cold and back again. 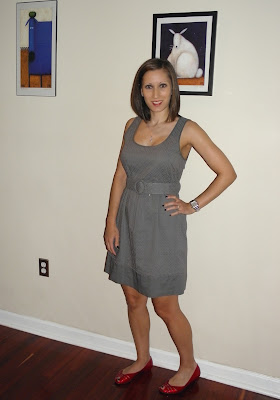 I wore this Juicy Couture dress on Wednesday, and decided to take a photo since I didn't the first time around for the Fashion Challenge. You know me... I love pairing red and gray!
Posted by Everyday Fashionista at 6/03/2011