We All Scream for Ice Cream

My husband has been doing a good deal of traveling for the last few months -- he has even been gone for the occasional weekend -- so we have been spending a lot of time together when he is in Atlanta. Chapin is my best friend, and even though we've been together for almost 12 years now and live in a tiny loft with no real walls or doors, somehow we never get tired of each other. (Hopefully that means we are "made for each other," or MFEO, which always makes me think of Sleepless in Seattle.) 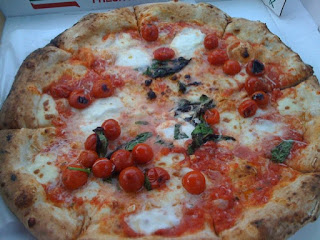 Friday, Chapin came home after spending almost two weeks straight in Florida working on a big project for his company. We were both exhausted from the week, so we picked up a pizza from our favorite pizza place, Antico Pizza -- which is literally the best pizza I've ever had in my life -- and brought it home to enjoy with a bottle of wine. These are probably some of my favorite nights: eating too much, drinking too much and just hanging out at home with the two best boys in my life: Chapin and George.

We spent the rest of the weekend trying to relax and get our energy up for the coming week, which meant a lot of sleeping and movie watching. We ventured to the theater Sunday to see Super 8 on the recommendation of a few friends (thank you, Kate F.), and we snacked on Reese's Pieces in honor of the movie's E.T.-esque themes. Chapin and I also made lasagna that I will probably be eating leftover for the rest of the week. Well, Chapin did most of the hard work, including making a turkey meat sauce from scratch, while I really just put the layers together while he supervised. 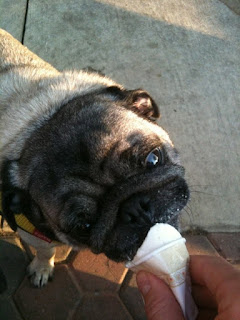 We also drove over to the Highlands for some gelato at one of our favorite places in all of Atlanta: Paolo's Gelato. We have been going there since it opened in 2000, during the first year we started dating, so we kind of consider it "our place." We go at least every week during the hotter months of the year, and occassionally will treat George to some doggie gelato they make especially for pets. Here are some classic pictures of George going to town on his treat. 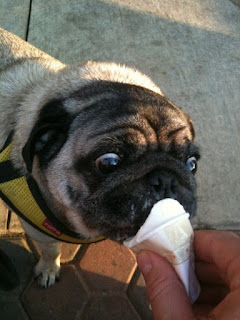