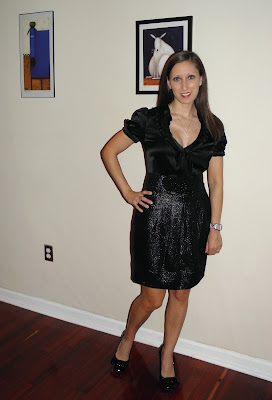 I finally arrived back in Atlanta last night after a disastrous last day in Dallas, Texas. With the funeral for my Grandpa over on Monday, my sisters and I planned to fly out Tuesday morning so we could spend some extra time with family on Monday evening.

BUT... We should have planned things a little better, since a forecast of freezing rain and snow was expected to hit around 2 a.m. early Tuesday morning. We were all preoccupied, of course, so unfortunately no one was paying attention to the news and local weather forecast. In the middle of the night, from our hotel room, we could hear the pounding hail, sleet and freezing rain... and it went on for hours.

We woke early on Tuesday to a call that my sister's flight back to Nashville had been canceled, and soon my flight back to Atlanta with my little sister, Laura, was canceled as well. The schools in the area were all closed, and the news casters were advising people to stay off the roads unless it was an emergency. We thought we might be stuck another night.

Laura also wasn't feeling well, and when she discovered on Tuesday that one of the kids in her class (she teaches kindergarten) had come down with strep, she realized that's probably what she had, too. So on top of all the weather and travel issues, poor Laura felt awful. With our flights re-booked for early evening, we went about trying to find an Urgent Care facility that was open so Laura could get a strep test. We found one about a mile away, and Gail and I walked outside to see if we could all walk there since we didn't have a car. Um... no. That wasn't going to work. The roads and sidewalks were so slippery, and the temperature was around 18 degrees. With the wind chill, they said the temperature really felt like zero! It was terrible. Since it had been in the 70s on Saturday when we came in, none of us had dressed very warmly, and I was shivering after only a few minutes.

Thanks to a call from my father, the hotel shuttle ended up driving us to the Urgent Care facility. It also picked us up after, it was confirmed, Laura had strep and received a shot of pencillin, since we didn't think we would be going to a pharmacy anytime soon. We spent the next few hours in the hotel lobby, since we had checked out of our room already and didn't have anywhere else to go. Finally, with our flights still confirmed, we left for the airport. The roads weren't too bad, but I was relieved when we finally reached the DFW airport. We got something to eat, and boarded the plane with no issues.

After we had all boarded and the plane doors were shut, the captain came on to announce that we may not be taking off after all. Laura and I looked at each other in horror. We didn't want to spend another night away from home. With just one runway open, the airport authorities had considered closing the airport altogether, but finally decided to let the planes on the runway take off. After an hour of taxing, we were finally in the air. I think we all breathed a sigh of relief.

There was more drama toward the end of the flight, as it was storming in Atlanta, and we hit a good deal of turbulence before finally touching down. I have flown a lot in my day, and that was probably the scariest flight I've ever experienced. I was never so glad to see the ground.

So, as you can see, there was definitely some drama for us yesterday. My dad says we will probably be telling our kids and grandkids this story for years to come!

As for my outfit today, I still thought I should wear something dark, as I am still thinking of my Grandpa a good deal. The dress, the BCBGMaxAzria "2fer" Dress with Silk Blouse and Taffeta Skirt, is comfortable and professional, since I have a bunch of meetings today. I am also wearing BCBGMaxAzria patent leather shoes.
Posted by Everyday Fashionista at 2/02/2011