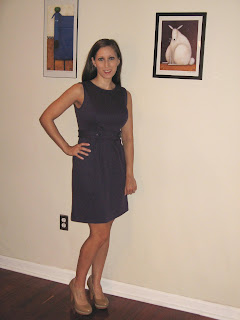 It's Friday again, the first of October, and I think Fall is officially in the air. My walk with George this morning helped wake me up, because the air was so cool and crisp. Chapin and I stayed up too late, so it was a struggle to drag myself out of bed. I didn't even work out, which says a lot.

I hear it's also supposed to be a beautiful weekend, and though Chapin has to work most of Saturday, we hope to spend some quality time with friends and family.

Shoshanna is a fairly new designer (last 10-12 years or so) who originally became famous for dating Jerry Seinfeld in the 1990s. I like her designs because they often account for the fact that women have hips rather than rail thin boyish figures. Her sizes tend to run a little big. This dress is actually a size 2, and let me assure you, pretty much nothing else in my closet is that size.

Shoshanna dresses can be expensive, but keep an eye out for sales at stores like Bloomingdale's and Lord & Taylor, because you can usually find a good deal. I don't think I've purchased anything online at full price in quite a while...
Posted by Everyday Fashionista at 10/01/2010