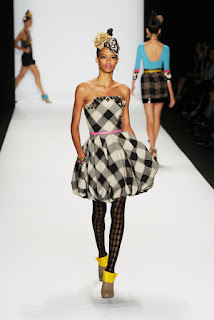 As a fan of fashion, I am also a huge fan of the Lifetime TV show Project Runway. In fact, it has inspired me to want to learn to sew, so that maybe I can make my own clothes someday instead of spending so much money buying other people's designs. My mom has actually offered to teach me. She is a master at crafts and has made all the drapes and curtains in her house. When she was in high school, she also sewed her own clothes, and made the dress my grandmother wore to my Aunt Annamarie's wedding.

However, my mom has her work cut out for her... The last time I tried to sew -- in 7th grade Home Economics class back in New Jersey -- I made a pin cushion and ended up with the material inside out. Don't ask me how. Aside from baking, I am not the best at keeping house. 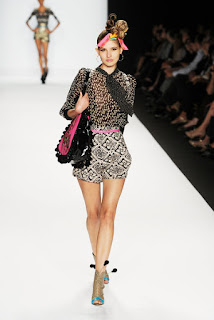 But I digress! The reason I wanted to mention Project Runway is because Chapin and I were both very upset at the outcome of last night's Season 8 finale. (Yes, my husband watches the show with me, and we have fun discussing whose outfits we like and who we think will go home.) This season has been filled with a lot of bitchy egotists, and though one, the evil Ivy, went home several weeks ago (finally), we were left with Ms. Big Head herself, Gretchen.

SPOILER ALERT: That Gretchen ended up the winner over the sweet, talented Mondo left me a bit angry and disillusioned. Although I really respect Nina Garcia's opinion, Gretchen's clothes on the runway were just BLAH! Mondo's clothes , on the other hand, had color, pop and zest, and I have included a few of my favorites on today's blog post.

I think Entertainment Weekly columnist Missy Schwartz put in best when she wrote, in her finale recap:

"It was here, in the middle of the heated deliberations, that I started to realize that the Mondo victory that seemed so inevitable at the top of the hour was no longer a fait accompli. It was not a good feeling. It’s true that Nina proposed (albeit rather unconvincingly) that they hand both finalists the crown. But that suggestion quickly disintegrated under the force of her increasingly fervent defense of Gretchen (“These clothes are on trend!”) and MK’s increasingly bitchy demeanor. To Jessica Simpson’s observation that Gretchen’s clothes were loose fitting, MK barked, “Hello! Read a magazine!” (That was way harsh, Tai.)

And I love the Clueless reference.

As for my outfit today, I went with a military inspired green dress from Laundry by Shelli Segal. I could not find the dress online, but here is a similar miliatry dress from Phoebe Couture. 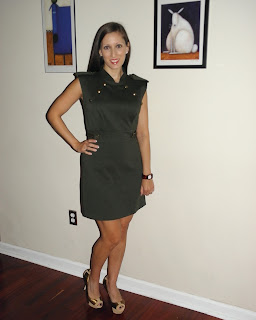 I paired the Military Ponte Dress with my L.A.M.B. Gorgeous Women's Pumps, which are, to me, stunning! I love the gold and suede detailing. I am also wearing my bracelet watch and diamond studs.

I guess I chose to wear this dress because it sort of Halloween-y, although not really... I miss the days when I could wear my costumes to work!
Posted by Everyday Fashionista at 10/29/2010

Nice site, nice and easy on the eyes and great content too.