Let's Call the Whole Thing Off 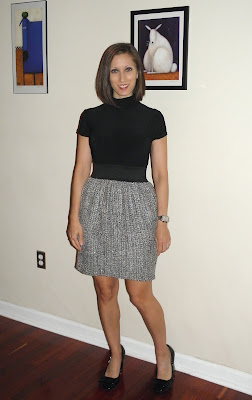 I have been feeling very old lately -- for a few reasons. First, I'm turning 33 in a few weeks, which means I am inching ever closer to 35, my "scary" number. It's basically when I feel a woman goes from looking young to looking "older." Although I hope my skin care routine, combined with staying out of the sun, will help my skin stay fresh as long as possible, I know nothing I do can stop gravity and the years from destroying my face. Sigh!

Second, Chapin has installed new lights in our bathroom, and they are BRIGHT.  They show every line and crevice, and it's not doing much for my self-esteem. I am hoping to convince him to change the bulbs or at least unscrew one so the light is not as powerful (there are three total above our sink), but he's not budging (so far).

Finally, Shannen Doherty, from my beloved 90210, turns 40 today. 40! At least I am still a few years away from that number, though I know I'll be there before I know it. This is the last month I can say the lines from When Harry Met Sally... and have them be true!

Sally: And I'm gonna be forty.
Harry: When?

Sally: Someday.
Harry: In eight years.
Sally: But it's there. It's just sitting there, like some big dead end. And it's not the same for men. Charlie Chaplin had kids when he was 73.
Harry: Yeah, but he was too old to pick them up.

Anyway, today's outfit is one that my mom has been holding hostage. Well, not really, but it did need her attention, because the last time I wore it -- last winter -- I leaned over to pick up George and ended up ripping the back part of the dress. Fortunately, my mom was able to fix it, and she ended up putting a nice slit in the back of the dress. I was very excited about it, because the dress looked fabulous, and I took it home with me without trying it on. Well, she was a little over eager with the slit. I put it on, and realized I felt a draft. You could see my butt cheeks! So last weekend, she fixed it, and here we are...

The dress is from ABS from Allen Schwartz, and is a mock two-piece dress with a black turtleneck and white/black wool skirt. It's no longer available online, but you can find the brand on most major retail sites. I normally would not wear this outfit in the Spring, but it's very breezy and chilly out today. We had a terrible rainstorm last night that fortunately hit after I was asleep. It didn't wake me up, so I guess the rain wasn't pounding too hard. Chapin actually stayed up late to make sure the suspected tornado watches would not turn into warnings. We had a close call a few years ago when a tornado hit in downtown Atlanta just a few blocks away from us.

I am also wearing black patent BCBGMaxAzria pumps.
Posted by Everyday Fashionista at 4/12/2011