Chapin and I just got back from three days in Florida. It was not a true vacation, since Chapin had to work some of the time, but it was still nice to spend time together and just get out of Atlanta for a few days. We also missed the terrible storm that hit Atlanta on Friday night, and had beautiful weather during our entire stay in the Sunshine State.

Here's the lowdown on our trip:

We left Friday afternoon, after stuffing our faces with pizza at my company's pizza party to celebrate the signing of several new clients, plus our recent AiMA Award nomination. Chapin may not work for my company, but everyone considers him (and George) honorary members, since they visit so often. By the time we got on the road, it was almost 3 p.m. We had to drive the new company car down to Dunedin, Florida, since Chapin's company is spending so much time there, it just made good financial sense to have a car. That is another reason Chapin wanted me to tag along on this trip: so he'd have company on the ride.

Chapin and I are kind of nerdy when it comes to car trips. We read. Well, I read out loud and Chapin drives. Over the years, we have read so many books together: all The Lord of the Rings books (and The Hobbit), all the Harry Potter books, all the Sookie Stackhouse books (the novels the series True Blood is based on), and many more. We are currently reading another series by Sookie Stackhouse author Charlaine Harris: the Harper Connelly mysteries. During our recent trip, we finished Book 1 and are now deep into Book 2: Grave Surprise.

We finally arrived in Clearwater about 11:30 p.m. on Friday night. It was a long ride, but frequent stops and our books made the time go by pretty fast.

Saturday:
Chapin had to be up early to go the plant , so I just hung out around the hotel he returned about 1 p.m. We left right away to eat lunch, find Chapin a bathing suit (he forgot his at home) and head to the beach. The water was chilly, and the there was a definite breeze, so we did not venture into the water. I stuck my toes in and promptly saw a crab coming toward me, so that kind of scare me off. Chapin didn't venture in at all. We were both content to sit in the sun and read our books. Chapin just started Game of Thrones, and I am engrossed in Tina Fey's new book, Bossypants. (The cover does creep me out, though. It's very weird!)

Saturday night we met some friends for dinner who live in the area, and whom we have not seen in several years. Alonso and Chapin were friends in high school, and we both adore him and his beautiful wife, Sejal. Alonso was also a groomsman in our wedding. Since we live in different states, it's been years since we have seen the couple... at least five!


We met them for dinner at a place Alonso wanted to try called Caretta on the Gulf. The food, mainly seafood, was divine, and I think we spent over three hours talking, eating and catching up. (And yes, there were two bottles of wine, too.) Chapin and I split the Crab Cake (served over Israeli Couscous Mac and Cheese), and the bread for the table included pretzel rolls. Covered in butter, these little rolls were amazing (though not for my waistline). But I was on vacation! By the time my entree, the Yellow Tail Snapper, arrived, I was not that hungry anymore. Chapin enjoyed his Monfish. He is a big fan of the General Tso's glaze.

Sunday:
Chapin had to go into work again early Sunday morning, but he was back around 11, so we took that time to go walk around downtown Dunedin, where Chapin spends most of his time when he travels to Florida for work. The town was so small and quaint, with cute shops and restaurants and ice cream parlors everywhere. And all the people we saw seemed to have a dog with them, which made me miss George terribly. We even passed a large mural pronouncing the city as "Dogedin." 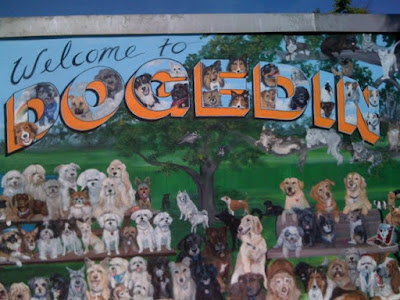 I also found a store named "Amanda Austin." It's funny to me, because I have a friend from high school with that exact name! What a small world.

Later that afternoon, we traveled to Tampa to visit with Alonso, Sejal and their two boys: Jay (age 2) and Nicolas (age 4). They have a beautiful home, and we enjoyed our visit immensely. Nicolas especially enjoyed "reading" me books about astronauts and the space program. 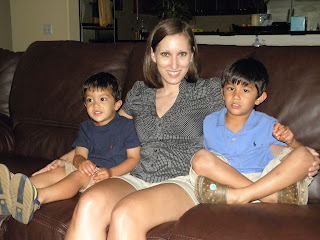 Monday:
Monday we headed home, so there wasn't too much time to see the city or go to the beach before our flight left in the early afternoon. It was a short trip, but filled with friends and fun.
Posted by Everyday Fashionista at 4/20/2011