Time of My Life

The Royal Wedding between Kate Middleton and Prince William is hours from taking place, and I can't wait. I know I'm excited along with the rest of the world, but I can't help it. It's a wedding, and it's between sweet Prince William, whom we've all watched grow up, and a commoner who will soon be a princess. How much more romantic can you get? At least I am not going crazy like the character Frankie from The Middle. That show cracks me up... and also makes me not want kids at ALL. 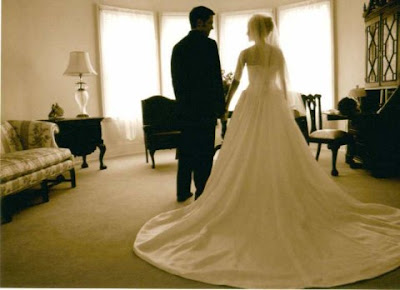 I wasn't old enough to remember Princess Diana's wedding, but my mom and mother-in-law have both told me stories about getting up early to watch the big wedding. I hope to watch it with my mom in the wee hours of the morning tomorrow... wearing my tiara, of course!

All this wedding talk makes me think of my own wedding almost eight years ago on a beautiful day in November 2003. Chapin and I were married exactly four years to the day after our first date, and it was a wonderful event. Those wedding pictures are probably one of the first things I would rescue, after Chapin and George, of course, if we ever had a situation where we had to grab and go (like a house fire).

I am probably most excited about the dress. I'm sure Kate will go with a British designer, but I'm not going to even garner a guess since it could be anyone. If I had my choice of all the designers in the world, I would go with Oscar de la Renta. He is my dream designer. 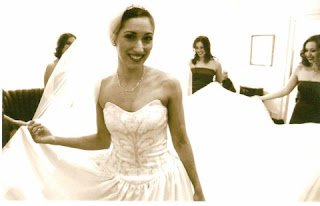 In the real world, I had a pseudo celebrity design my wedding gown, though he wasn't a celebrity at the time. Randy Fenoli, whom you may be familiar with if you watch Say Yes to the Dress on TLC, designed my gown, and I met him during a trunk show in 2002 when I purchased it at Bride Beautiful here in Atlanta. Here's a picture of me with Mr. Fenoli just after making the big purchase. In case you want to know, my budget was $1,000, and I spent $1,600. Yes, Chapin wanted to kill me, but that's another story...