Something to Sing About

Well, thank goodness, I made it through the week. Despite my best efforts, I still ended up working several hours from home last night, so I am hoping I will have the opportunity to take it easy this weekend.

Although it was only 40 degrees out this morning -- how crazy is that for April 1st? -- I still decided to wear a sleeveless dress because it is slim pickings when it comes to the items remaining in my wardrobe. This empire waist print dress, from BCBGMaxAzria, is about two years old, but I haven't worn it all that much. I'm also wearing peep-toe Stuart Weitzman Bamada slingbacks in black.

My lip color today is not from a lipstick, but from Fresh's Sugar Plum Lip Treatment (with SPF 15). The color is not too dark, and it's soothing and smells fantastic. I'd like to try the other "flavors" as well.

I did wear this dress on Thanksgiving Day 2009, which we spent in Alabama with Chapin's family. That was also our last Thanksgiving with Izzie, so remembering that holiday makes me happy. I am trying to get to the point where thinking about Izzie makes me smile, rather than break out in tears. 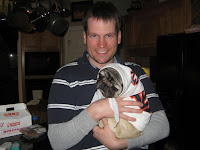 I know I have to remember all the wonderful times we had together, and the happiness she brought me each and every day of her life. This picture is from that Thanksgiving weekend when our whole clan went out to see the Christmas lights and decorations. Izzie came with us. We were able to get her in unnoticed due to this charming carry bag we had for her. We put this Auburn scarf around her to keep her warm.

In other news, I know Grey's Anatomy aired a musical episode last night, but I stopped watching that show about a year ago when I realized I didn't really care for any of the characters anymore. Izzie was actually named after Katherine Heigl's character on that show. We already had a George (who was named after George McFly, and I just think George is the perfect name for a pug), so I thought, why not add an Izzie.

But, as my sister, Gail, pointed out on Facebook, when it comes to TV show musicals, nothing can top Buffy. I probably know all the words to all the songs that aired in the "Once More with Feeling" episode. Here's a snippet: